Magpies on the Pylon

Magpies on the Pylon is set in a tiny bedroom. Jim, a Traveller father struggles to cope with the suicide of his 23-year-old son. After his son’s death, Jim becomes isolated from other family members.
The audience accompanies Jim on an emotional roller-coaster ride as he articulates loving memories of his son, his fears for the well-being of his other three children, the turmoil that has developed in his relationship with his wife, his anger at God, and his agonising questions about whether there was something he could have done to prevent his son’s death.

Michael Collins is a member of the Irish Traveller community who has been an advocate of Traveller human rights for over 20 years. He is an actor, writer and performer. He has acted on stage in the Abbey and Olympia Theatres. Michael played Johnny Connors in RTE’s Glenroe for over 10 years and has been in numerous films including Trojan Eddie and Man about Dog.
Michael received the Traveller Pride lifetime achievement in 2013 from the President Michael D Higgins.

Michael has been developing the idea of establishing a Traveller Theatre Company, which would work with Travellers and other socially excluded and ethnic minority groups, to allow them to tell their stories and issues in an artistic way. This company will be called Traveller Wagon Wheel Theatre Company. 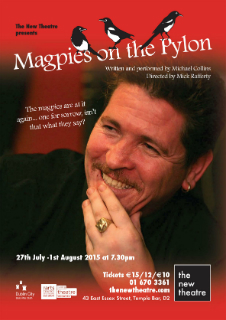