Plagued as a child by the tale of a monstrous spectre who comes in the night to steal the eyes of children, Nathaniel lives with a pertinent ocular obsession (three drops each eye, blink twice, head back). Writing to his childhood-sweetest-heart, Clara, and weekly visits to the optometrist happily occupy Nathaniel’s time (cream of euphrasia, all around the orbits. Don’t drag the skin) – until the day that he is apprenticed to the charismatic Doctor Coppola (check dilation, low light in a mirror) and meets her beautiful, blind daughter Olympia.

This play is the latest in a long line of works inspired by Hoffmann’s chilling 19th century short story, including the ballet ‘Coppelia’, opera ‘The Tales of Hoffmann’, and Neil Gaiman’s ‘Sandman’ series. Staying true to its origins, Olympia is a horror play in the school of ‘Theatre du Grand-Guignol’ and ‘The Woman in Black’. PYGMANKENSTEIN draws influence from classic cult horror to bring the audience a truly creepy, uncanny theatre experience.

Conceived by PYGMANKENSTEIN and developed with the support of The New Theatre Residency Programme, Olympia runs from the 12th to the 24th October, ending just before Halloween with a fancy dress after party open to all ticket holders on the 25th. 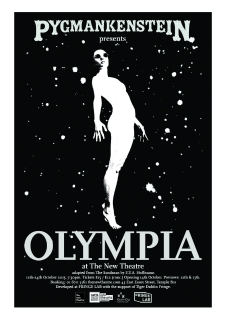 Pygmankenstein and The New Theatre