About The Play:
Susan and Michael enter their flat in the midst of a blazing row. Michael wants a baby, she thinks he’s just bored. Susan is rattled by his comment that she is ‘unnurturing’.
In a effort to distract from the issue and to prove that she’s not cold and heartless, Susan embarks on a series of new hobbies and projects; house plants, yeast cultures, lemon preserves, the suggestion of a puppy, “nurturing” these projects. Eventually at a flea market she buys an old shop-front mannequin with the intention of using it as address dummy to make dresses for her niece. As she works she talks to the dummy whom she refers to as “Millie”, slowly beginning to warm to the idea of having a real child of her own.
Michael is confused by Susan’s behaviour and initially repulsed by the presence of the mannequin in his living room but soon finds himself talking to it also, drawn to its curvature and its inability to contradict him..

About The Playwright:
Emma Hughes is a graduate of Trinity College Dublin with a BA in English and Drama Studies. During her time at Trinity she participated in both the Playwriting and Advanced Playwriting modules offered, producing two full length plays; Spent In Good Company and Leave At the Tone. After completing her degree she began The Lir MFA programme in Playwriting during which she wrote her most recent play, The Big Pink Suede Elephant which was showcased amongst other playwriting students at the Scripted showcase as part of Tiger Dublin Fringe in 2014.

About The Play:
Aidan is a tearaway and reformed criminal who has arrived broken and fragmented as he arrives at a crossroads in his life. Examining his life he struggles to comprehend the inevitability of his choices and trying to make sense of the wreckage of his own journey. In his youth he showed promise as an amateur boxer and his old trainer used to joke that he “could be another Billy Conn”, who was once a champion of the world. It was a joke that now hangs like an albatross around his neck as he deals with guilt and regret and punctured dreams.

About The Playwright:
Andrew Kenny is a graduate of the famed Bristol Old Vic Theatre School. He has recently appeared in a national tour of The Assassination of Brian Boru for The New Theatre directed by Nora Kelly Lester and BEASTS directed by Colette Cullen for Smock Alley Collaborations. He has previously worked with the New Theatre on Shafted directed by Simon Hubbard and Ergophobia directed by Ciaran Colley and Aidan Durkan. He toured his one – man show Notable (Hernan Catvin) around the country.

He has appeared in numerous theatre productions including Macbeth, The City Madam, The Curse of the Starving Class (Andrew’s Lane) and Algernon in The Importance of Being Earnest for Bristol Old Vic. TV credits include Luke in The Clinic, John in Legend and The Man Who Lost Ireland. Film credits include Tiger’s Tail, Camelot and Rearview. He has also had success as a writer and as a tango dancer.

About The Play:
Helen is mopping the floor, Phil is popping balloons. Gary’s gone home. Helen and Phil aren’t talking about it. The party is over, they are still there. They aren’t leaving until the mopping and popping is done. Pop… pop… pop…
About The Playwright: Caitríona Daly
Caitríona Daly is an award winning playwright from Dublin. She is a graduate from The Lir and the Royal Court Young Writers Programme. Her work has been performed extensively around Ireland and the UK and has previously been supported by the Traverse Theatre, Camden Peoples Theatre, Fishamble and the Dublin Theatre Festival.

About The Play:
Drawing Crosses On A Dusty Windowpane is a play about loss. Drawing on spoken word, it’s a poetic act of remembrance and questioning; performer Claire Galvin stands on stage and shares with us a portrait of a person, a place, and a time that aren’t here any longer. It’s about family, it’s about ageing, and it asks some hard questions about the Ireland we live in.

About The Playwright:
Dylan Coburn Gray is a writer and performance poet based in Dublin. His first plays were written for Dublin Youth Theatre; And Then He Was All in 2010 and Tarot in 2011, the first of which is available through NAYD’s Playshare programme.

His play Boys and Girls premiered as part of Dublin Fringe 2013, winning the Fishamble Best New Writing Award. It was nominated for the Stewart Parker Trust Award, and for the Best Theatre Script Award at the Irish Writers’ Guild Awards (Zebbies). It has since toured to New York and Moscow.

As an actor, he has toured extensively with Brokentalkers’ The Blue Boy.Credits as a sound designer include The Rabbit Hole, by Louise Lewis; TELL, as part of Theatremachine Vol. 3; Bernarda’s House by Veronica Coburn.

About The Play
Bankrupt property developer Teddy, kidnaps Jack – ‘the man who ruined the country’, then launches a family-run web-cam business selling face-to-face airtime to an angry public. For a fee people can vent their rage at Jack and finally feel that justice is theirs. His website ‘The Public Strikes Back’ quickly becomes an overnight sensation. Dressed as Darth Vader and calling himself MISTER V, Teddy rapidly becomes the face of an underground social-media revolution with his followers sporting Star Wars merchandise.

Soon, however, the public hunger for Jack’s blood proves more popular than words and Teddy faces a dilemma – but what self-respecting entrepreneur can refuse the lure of profit? The Entrepreneurs is an absurd black-comedy about revenge, justice, capitalism and the ‘dark side’ of human nature.

About The Playwright:
Neil worked for many years as a stage actor in Cork playing such roles as Christy Mahon in The Playboy of the Western World, Gar Private in Philadelphia Here I Come and Lee in True West by Sam Shepard. Neil holds a Master’s Degree in Directing for Theatre from UCD and is a tutor in the Drama Department of Bray Institute of Further Education.

His Directing credits include Attempts on Her Life at the Project Cube; The Trial by Franz Kafka in Smock Alley Theatre; Bouncers at the Everyman Palace, Cork; Mark O’Halloran’s Too Much of Nothing at Bewleys Café Theatre; Conditioned at the Axis Theatre Ballymun and the Irish première of Arabian Night by Roland Schimmelpfennig at the Goethe Institute Dublin as part of Dublin Fringe. His stage adaptation of Tom Barry’s memoir Guerilla Days in Ireland has toured nationally to such venues as Town Hall Galway, Millennium Forum Derry, INEC Killarney, Everyman Cork and the Olympia Dublin. He is currently writing a screenplay version of Guerilla Days in Ireland.

About The Play:
You came here through the miles-high rise hives of illustrious commerce, through skycrafts circling the crags and filthy teeth of our acropolis. Raining now for six full years or more and visibility… is especially poor. But you came anyway in your droves and hordes, looking for an answer or a reason and maybe more, but listen… Listen… I. Can’t. Help. You.
Friends, I am just a conduit to the damned beautiful and the hunted, haunted – a multiplex of voices, the how…can…I… suggestion box, I am the abyss screaming back and I am NOTHING if not pragmatic
I am Aisa Morta. Welcome to Loveboxx.
A presentation of ideas for The New Theatre residency team’s 2016 show

About The Playwright:
Lauren-Shannon Jones is a playwright and film-maker from Dublin. Her first two plays opened to critical acclaim: Grow (The Virgin Eclectic, 2013) and The Assassination of Brian Boru (The New Theatre, 2014/15). She completed an honours degree in film production from Wolverhampton College this year. Her graduate film Enclave was awarded best screenplay, best direction and best overall production of the class of ’15. Lauren is a member of the Irish Playwrights and the Screenwriters Guild and the Screen Directors Guild of Ireland. Recurring themes in her work include future shock, sibling rivalry, cults, paranoia, body horror, and the utter unreliability of memory. 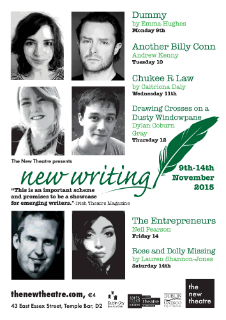