Due to overwhelming popular demand, AC Productions returns with their critically acclaimed production of Moliere’s hilarious farce The School for Wives.

In this production of Molière’s classic farce Simon Toal plays Arnolphe, a middle aged and conceited socialite who relishes gossip. He believes women should be kept in absolute ignorance and away from all things worldly for fear of them being unfaithful. To assure it never happens to him he has arranged that a young girl, the beautiful Agnes (Grace Fitzgerald) be brought up according to his strict instructions. She is blissfully innocent and now that she has come of age, Arnolphe has arrived with the intention of marrying his naïve young creation. His plans are thwarted when he finds that the beautiful Agnes has fallen for the young, handsome, but none too bright Horace.

This new version of the farce sticks to the era but adopts a more 21st Century approach to the characters. Molière landed in deep trouble with this play, going as far as he could mocking the patriarchal society of the time. This just takes it to its natural conclusion without losing any of the slapstick and humour with which he established himself as one of the greatest comic dramatists of all time.

AC Productions began in 2004 and have specialised in classic drama.
In 2012 their production of PINTER X 4 was nominated for Best Production at The Irish Times Theatre Awards. They have produced all the major works of Samuel Beckett and their production of WAITING FOR GODOT has played Dublin, Hong Kong and Singapore.
Other work includes acclaimed versions of Shakespeare’s HAMLET, THE MERRY WIVES OF WINDSOR, MUCH ADO ABOUT NOTHING, TWELFTH NIGHT and TIMON OF ATHENS.

Peter Reid is Artistic Director of AC Productions.
He adapted the acclaimed production of DESIRE, based on Tolstoy’s short story The Devil, for The New Theatre in 2014.
He is a regular freelance director with recent productions of PORT AUTHORITY by Conor McPherson for Viking Theatre, and DANNY AND THE DEEP BLUE SEA by John Patrick Shanley. He also contributed the short plays THE LAST PLACE WE WERE HAPPY for the ANGELS IN THE PARK project and DISAPPEAR for 60 MINS IN DUBLIN for Maylin Productions.
Photos by Al Craig 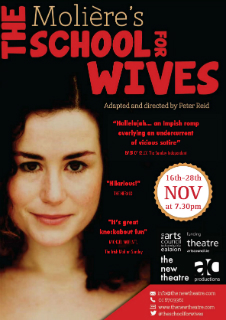