“Roche’s dialogue is crisp and laconic….with a great deal of credibility under Fitzgerald’s direction…excellent performances….thumbs are very definitely up.”

Returning to Nebraska from a tour of Afghanistan, Hillis (Patrick O’Donnell) a US Marine, tries to settle back into normal life as a civilian in a town he barely recognizes, and to reconnect with his father (Pat Nolan) and friends.
A chance meeting with the spirited Ashley, (Lesley Conroy) starts him on the road to recovery. But as Ashley has dangerous baggage all of her own, it is only a matter of time before Hillis is forced to confront his past and all the demons that lurk there.
“We sleep soundly in our beds because rough men stand ready in the night to visit violence on those who would do us harm.” – George Orwell

WHAT THE CRITICS ARE SAYING ABOUT SNAKE EATERS

“Roche’s dialogue is crisp and laconic….with a great deal of credibility under Fitzgerald’s direction…excellent performances….thumbs are very definitely up.”

– Emer O’Kelly Sunday Independent.
“The dialogue is nicely written, easy to engage with and interesting to follow. In addition to all that, there are a good few laugh provoking moments…..this dark comedy is very well supported by the strong cast. Both big and small characters are being really fleshed out by the great acting team; with a specially memorable performances by Pat Nolan and Cillian Roche.”
– Unforgettable lines

4 1/2 stars..”Snake Eaters is a powerful piece of writing, with some dark comedy and heart pulling moments. It highlights the lasting impact of war on marines and their families. In my opinion it is a must see for the times we live in.”
– Soundfeed.com
“Snake Eaters – Stewart Roche’s latest play was brilliant tonight – a credit to his writing and to all the actors especially Patrick O’Donnell”
– Edwina Elizabeth, the Life of Stuff.

“While Snake Eaters could easily be classed as a war story, it is far more than that….bringing the audience on a journey with the characters from fun and laughter to gritty reality. Nolan’s firm but sweet portrayal of Don compliments the tougher characters in Snake Eaterswithout stealing the limelight from O’Donnell and Conroy, both of whom give sterling performances.
There is a surprising amount of humour in this tale due to the razor sharp dialogue and great characters Roche has created in what is arguably his most ambitious play to date. The story is told with compassion and hope, coming together in a new piece of theatre that is well worth a look.’.”
**** (4 stars)
– davidkeane.net

“an impressive piece of new writing, well realised by the cast and crew. There are many great moments…and some very funny scenes.” – No More Workhorse
“It is a well-acted play, with a strong cast, and performances……the opening of the second act is explosive and full of emotion, with a great monologue from Hillis, delivered extremely well by O’Donnell… an excellent performance from Cillian Roche that really catches the eye.. Stewart Roche’s style, which at times is traditional in the best sense of the term….. keeps moving forward, with excellent writing” – The Red Curtain Review

ABOUT THE AUTHOR
Originally an actor, Stewart Roche began writing for the stage in 2012. His first play ‘Curious Tales for Christmas’, a re-imagining of several Victorian Ghost Stories, had a successful run in Theatre Upstairs. Stewart later updated Bram Stoker’s ‘The Judge’s House’ for a run in Bewley’s Café Theatre in October 2013. It caught the eye of Propersous Dramatic Society, and their production of it came runner up in the 2013 All Ireland one-act finals.
His first original play ‘Revenant’ had its world premiere at The New Theatre in November 2013 and was nominated for the prestigious Stewart Parker award.
Stewart was prolific with his output in 2014, penning ‘Variance’ for Timador Productions and ‘Tracer’ for PurpleHeart following its participation in Fishamble’s New Play Clinic under Gavin Kostick’s mentorship. 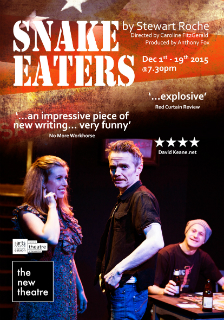