Clodagh Corona has escaped and is going home, she recalls the day that changed her life, with Gerathy when he took her “Back the Tide”.
It’s a story she has to tell to all her hometown, a story she must tell to survive. A story of …LOVE.
Neill Flynn’s drama is full of mystery and menace, rhyme and pitch black humour.

About the Director
Recent work includes his new version of Moliere’s THE SCHOOL FOR WIVES and a production of Conor McPherson’s PORT AUTHORITY for The Viking Theatre, Clontarf. He also wrote DESIRE, an adaptation of a Tolstoy short story. In 2012 the company was nominated for Best Production at The Irish Times Theatre Awards for his PINTERx4. Shakespeare productions include HAMLET, MUCH ADO ABOUT NOTHING, THE MERRY WIVES OF WINDSOR, TWELFTH NIGHT and TIMON OF ATHENS.

About the Author
His first screenplay BLUE YONDER was part of the Final Selection of six from submitted to the BBC Writer’s Room Film/TV script call in 2014. His radio play HONEY was recently produced by the Sunday Playhouse on RTÉ Radio One. His stage play CLOCKED was a winner in the International Playwriting festival held at the Warehouse Theatre, London where it received its premiere production in 2008. He was shortlisted for the BBC International Radio playwriting competition for his play PANTALOONS. In 2010, Neil won the RTÉ PJ O’Connor Radio drama award for his play THE QUIET WILLOUGHBYS. In 2013 his play BACK THE TIDE was placed in the top ten finalists of the Verity Bargate Award.

About the Performer
Previous theatre roles: Sissy in THIS IS A PLAY (Bewleys Café Theatre), Annabelle in ANNABELLE STAR (The Ark), Rosalind in AS YOU LIKE IT (Druid), Helen in THE CRIPPLE OF INISMAAN (Royal National Theatre), Gert in BIG MAGGIE (Touring), Bean on Lios in DUN NA MBAN TRI THINE (The Peacock), Barmaid in ASYLUM, ASYLUM (The Peacock). She played the part of Maura in A SNAIL CALLED SAM and MISSUS TURNER in THE SOUND AND THE SPERM which was selected as a finalist at The PRIX EUROPA FESTIVAL, both for RTE RADIO.

TV & Film credits include DAMAGE, PURE MULE, THE FAMILY and Bette in the short FRUIT 15 directed by Claire Lynch. 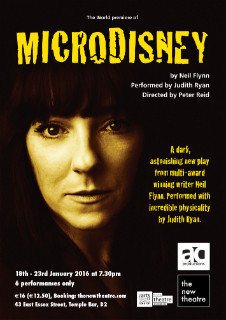