Home  /  Theatre   /   Madame de Markievicz On Trial
Back to events

Madame de Markievicz On Trial is a drama centred around Constance Markievicz depicting an event in Dublin at Easter in 1916 when a policeman was fatally shot. It is set in a courtroom and a prison cell during the autumn of 1917 and the dialogue is largely based on the actual extensive speeches made by Markievicz during this time.

The play has a cast of 6 actors, Barbara Dempsey as Madame de Markievicz and Neill Fleming as the Prosecutor. Apart from the prosecutor, all the characters are based on actual people and each one is impressive in their strength of character. William May, the prosecutor and sole fictional character in the drama, is the Devil’s Advocate. He trawls through all aspects of Madame’s life and times, from her birth to 1917, to challenge the misinformation created by post – 1916 heresay. Completing the cast are Amy O’Dwyer, Andrea Kelly, Siofra O’Meara and Ian Meehan.

The testimonies of the witnesses, including Dr Kathleen Lynn, Helena Molony, Margaret Skinnider, Geraldine Fitzgerald and William O’Brien of the ITGWU, are interwoven to show that Constance de Markievicz was a normal multi-dimensional woman in contrast to the usual one-dimensional icon frequently presented. The audience will be the ultimate judge, because the conclusion of this remarkable production enables the audience to decide the final verdict, innocent or guilty.

Madame de Markievicz On Trial is written by Ann Matthews and directed by Anthony Fox. Following its return visit to The New Theatre Dublin on 1st March as part of the 1916 Centenary Commemorations, the production will embark on a nationwide Tour of 15 theatre venues which will begin in Listowel on 18th March and will end with a special invitation to perform at The Centre Culturel Irlandais, Paris, on 23rd April, 2016.

Directed and produced by Anthony Fox

Other works include “Vanguard of the Revolution” in Ruan O’Donnell (ed.), The Impact of the 1916 Rising (Dublin, 2008) and ‘Cumann na mBan and the Red Cross,1914-1916’ in Associational Culture In Ireland and abroad edited by Jennifer Kelly and R.V Comerford (2010), ‘Parade of poverty in the streets 1913: the mothers and children’ in A Capital in Conflict: Dublin City and the 1913 Lockout, (eds) Francis Devine Mary Clarke and Maire Kennedy (published by Dublin City Council 2013)
(Autumn 2014), Irish Citizen Army.

(2016) ‘The Women’s Section of the Irish Rebel Army Easter 1916: Class background and role’, in Socialist History, issue no. 47 (2016), editors are Dianne Kirby and Emmett O’Connor (Dept. of History, Ulster University).

Drama:
Wrote a drama called ‘Lockout’, staged at the New Theatre in Essex Street in April 2013. By popular demand it had a re run in October 2013. It was then staged at the Hollywood, Los Angeles Fringe Theatre Festival July 2014.

Current play:
Madam De Markievicz On Trial. A drama based on the controversy on the death of Constable Michael Lahiff in 1916.
In February/ March 2016 Madam De Markievicz On Trial is going on a National Tour: finishing in Paris on 25 April 2016.
Currently working on a new Drama, titled Two Dublin Women about the lives and times of Elizabeth O’Farrell and Julia Grennan 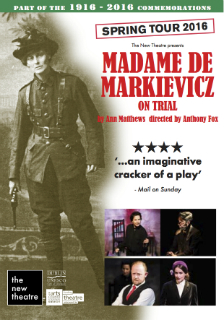