We had to include this film in the list. It brought into the mainstream the realities of the devastation caused by the onset of AIDS, as experienced in among gay men’s communities. It also showed how friendship and comradership are as important to gay lives as sex and romance.

The expression ‘long time companion’ was once the euphemism used to refer to a gay partner, and this film documents terminal illness as it is experienced not only by the ill but also by their partners and their friends.

Longtime Companion is a choral film, the group portrait of an extended queer family made of like-minded people. Its scope is wider than that though. The film manages to honour, in the beautiful closing scene, all of those who went before, victims of government-led homophobia, self-hatred, every-day discrimination ─as well as honouring all the dead we carry with us as we move forward.

Do pay attention to the gorgeous tempo of the film, with director and editor leaving an action-free space at the end of each scene before cutting to the next. Like the film itself, this stylistic decision in fact shows that there are no gaps… as long as there is a witness. 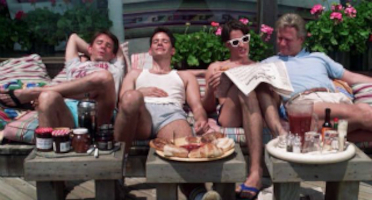