A bunch of young gay and lesbian friends are having the time of their lives. Partying all night, scoring left right and centre, living for today without the smallest care in the world… They all work together, they practically live together, and to all intends and purposes, they are the dream family that every young queer hopes to find.

But something is nagging them. With one exception, none of them is out to their parents, and for some strange reason, it doesn’t feel right. They are living openly gay lives, and every time their parents enter the frame, it is back to the lying and deceiving of the closet days. So the friends make a radical decision: they will organise a weekend away, invite everyone’s parents along, and come out en masse, collectively, so that the friends can bear the brunt of their parents’ reaction as one, minimising the pressure and, if it comes, the grief.

A daring and original plan it is, and not without its logic. The weekend rolls on, the speeches prepared, the group-strategy rehearsed… but there is one thing the youngsters have not accounted for. The parents! As a chain of unforeseen disasters, fortuitous encounters, and colliding pasts unfolds, this family of friends will have to face the fact that their biological families may be not be as conservative (or as straight) as they assume. In fact, our protagonists may have to end up reverse-parenting some of the middle-aged couples, as they run amoch in the weekend villa… 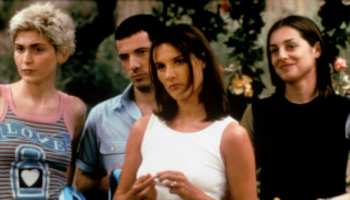