The story of a family whose ancestors have seen the First World War, the Irish Civil War and the War of Independence. Beginning with the announcement of the Great War, it takes the audience on a journey right up to 1944.

Their story is one of struggle and survival as they strive for acceptance through the decades, facing countless hardships in the fight to keep their home running.
Based on real events and stories passed on from generation to generation from the camp fire to the kitchen table, Tinker, Father, Soldier is a celebration of the Traveller Community through songs, poems and stories and an exploration of the relationship between the settled and travelling community. 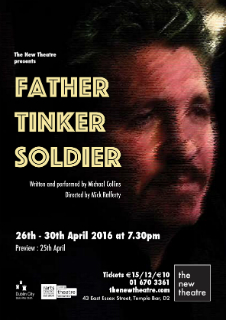