The Luthier by Lucy Caldwell is a monologue inspired by a story in the New York Times in June 2009.
The play centres around a young apprentice luthier – a violin repairman – in Ramallah. His name is Dawood Al-Suleiman, and his story reveals, as he repairs a violin, a memory from ten years previously, when he was aged nine.

“White phosphorus ignites in the air and when it comes in contact with the skin it burns to the bone and beyond. It burns at 816 degrees Celsius or 1,500 degrees Fahrenheit until the oxygen supply is cut off or there is nothing left to burn. You can stand on the other side of the street and watch your mother and your sister and your baby brothers melt and turn to smoke before your eyes and there is nothing you can do, nothing”.

Lucy Caldwell is an award-winning writer, and winner of the Rooney Prize for Literature 2012.

The Show is Directed by Davey Kelleher and Performed by Rob Malone.
The Luthier was first commissioned by Origin Theatre Company New York (Artistic Director George C. Heslin) for First Irish Festival and opened at 59E59 Theatre in October 2009. 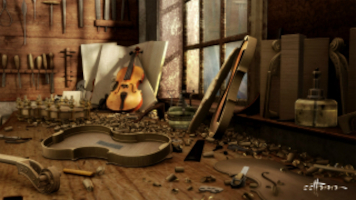