Spanish with English Subtitles
José Luis García Pérez, David Castillo
…and then the bears came one by one, and had a picnic in the sun.

The unstoppable growth of the queer ‘bear’ community in the last few years has been a great source of excitement for many a bear and non-bear. It was high time that someone questioned the prevalent cult of pristine lean youth associated with gay male clubbing culture. Not everyone is sixteen or wants to be sixteen. Not everyone is sculpted in Greek marble, wearns Calvin Klein mankinis, and has no needs or aspirations beyond the next shag.

The alternative ‘bear’ culture of warmth and support, of authenticity and self-respect, of celebrating the sexiness of maturity and experience, has reclaimed values that had become invisible in the haze of the disco days.

The comedy Bearcub is about a young boy who ends up under the care of his ‘bear’ uncle, and, by extension, of his uncle’s self-made family of ‘bear’ friends. Using a traditional story-telling device, as this visiting stranger begins to learn the ways of the tribe, so does the audience slowly gain an understanding of the wild and wonderful ways in which LGBTQ people continue to invent new ways of living.

What is a functional family? A sort of stir-fry where each keeps their unique flavour, bonding with others in a gentle broth. A group of people who can be counted on. A bunch of portly, funny, chill-out, and rather hairy fellas, who care for one another.
We love our queer functioning families, because together we can be more ourselves. 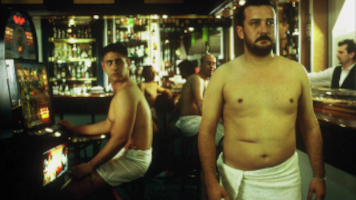