A new play inspired by Sean O’Casey’s 3rd autobiography by Eddie Naughton, about O’Casey’s life in – and leaving of – Dublin.

Set in his house in Devon, when Sean O’Casey is 78 years of age.
This is a story of O’Casey’s life growing up in Dublin while political and artistic life was fermenting that eventually led to The Great Lock Out of 1913, The Easter Rising of 1916 and The Great War 1914-1918 – All events influenced Sean O’Casey and led him to write the four world classic plays – The Shadow Of A Gunman, Juno and the Paycock, The Plough And The Stars and The Silver Tassie.

Ronan Wilmot will perform this unique story of Ireland’s greatest socialist/political playwright. Ronan has acted with the Abbey, Gate, Focus, Project and in the UK with The Royal Shakespeare Company, The Royal Court and The Liverpool Playhosue, 7:84 Theatre Company. 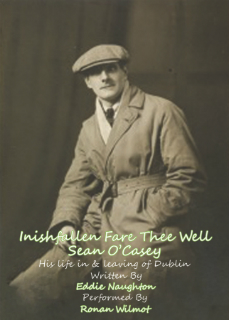