Alceste is committed to sincerity and truth at all cost, he despises dissemblers and flatterers and yet, he has a blind spot.

Despite his loathing for deception and frivolousness he is desperately in love with Celimene, a beautiful, vain, narcissist. She delights in gossip and rumour, has many suitors and loves her celebrated position in society.
Set in the 1700’s yet starkly relevant to today.

This production will again be adapted and directed by Peter Reid. 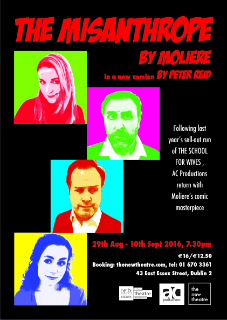 Adapted from Molière by Peter Reid