The inspirational figure of Ireland’s mythological super-hero, Cú Chulainn, is the centre of DUSK, a new verse play by writer, poet and musician Eamon Carr.

In this unique drama, influenced by Agallamh na Seanórach (Colloquy of the Elders) and the Japanese Noh tradition, the ghost of Cú Chulainn appears in conversation with a modern young woman.

His Nemesis, the Morrigan, seen in the form of a crow perched on Cú Chulainn’s shoulder in the statue by Oliver Sheppard in the GPO, is also a character in this play.
Dusk explores a provocative correlation between Irish myth and contemporary reality as unseen influences, which lie beneath the surface of our everyday world, manifest themselves. 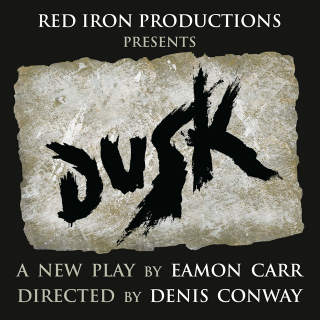