Home  /  Theatre   /   The Cult Horror Festival
Back to events

We’re treating our club members to a fantastic mix of cult horror classics and modern spine-tinglers! Not a member? You can get a ticket on the day, contact the box office for details or click here to join the Facebook group. Don’t worry – it’s free, and you can exit any time you like!

THE WICKER MAN (1973)
A police sergeant is sent to the Scottish island village of Summerisle in search of a missing girl whom the townsfolk claim never existed. Stranger still are the rites that take place there. Stars Edward Woodward & Christoper Lee
‘…subtle in its thrills and chills, with an ending that is both shocking and truly memorable’

THE THING FROM ANOTHER WORLD (1951)
The first adaptation of the 1938 novella “Who Goes There?” by John W. Campbell, (later made famous by John Carpenter’s The Thing) this science fiction horror concerns a U. S. Air Force crew and team of scientists who find a crashed flying saucer and a frozen body in the Arctic ice.
‘Set the template for a decade of alien invasions…’

SUSPIRIA (1977)
In this Dario Argento horror, a young American dance student begins to fear her exclusive German ballet school is being run by a coven of witches.
‘one of the most striking assaults on the senses ever to be committed to celluloid […] this unrelenting tale of the supernatural was—and likely still is—the closest a filmmaker has come to capturing a nightmare on film.”

WHISTLE AND I’LL COME TO YOU (1968 & 2010)
Two startling – and startlingly different – versions of the MR James classic short story, these two short films made decades apart show how classic horror and modern horror can produce two different but equally superb interpretations of the same story. In the first; a sceptic finds an old whistle on the beach and blows into it. Innocent enough. So why does he have these persistent nightmares in which he is pursued by an unknown figure? And just who has been sleeping in the bed beside him? In the second, John Hurt’s character takes a holiday to a remote English beach side town and leaves behind his mentally deteriorating wife. The same dreams torment him, but for what reason?
‘…a man, alone by the sea, haunted, pursued by something. It is terrifying.’

SHUTTER (2004)
A young photographer and his girlfriend discover mysterious shadows in their photographs after a tragic accident and quickly learn the past is not so easily escaped. A slow burner with a mounting sense of dread, Shutter was another victim of the Hollywood remake machine, but has rightly gained a phenomenal cult status in the years since its release.
‘it delivers so many great scares and twists that it may have you sleeping with the lights on.’

ABOUT THE CLUB
The New Theatre Cult Film Club is a not for profit event which aims to present cult classics, little known gems, forgotten crowdpleasers and international films that deserve an Irish audience. The club was founded by film lovers for film lovers, and after two hugely successful seasons we’re delighted to present the first ever Cult Horror Festival. Because we’re not for profit we can guarantee you won’t find a cheaper cinema ticket in town!

If you want to become a member and see what events we have lined up just click here to join the Facebook group or keep your eye on the website!
TNT Cult Film Club is licensed by the MPLC 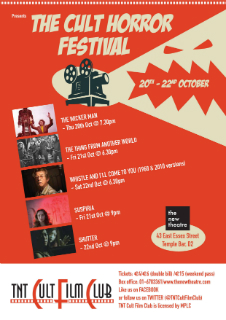