Ian is the father. Andy is the son. Today they meet on an empty beach in Dublin for the first time in eight years. They can’t help but question the events of that day eight years before – the crime that tore them apart. The murder one of them committed.
About The Author:
JJ Caine was born in Dublin, but now lives in Co. Kildare. He’s an actor, writer and filmmaker. As an actor he has toured around the country, preformed at he Lyric, Belfast, and the National Theatre, London. He was a member of the Royal Court Theatre’s first ever invite only Young Writer’s Programme where he developed a play. As a filmmaker he has written numerous feature and short screenplays and directed shorts. He is currently developing a feature film project
Directed by Peter Reid, performed by Paul Kealyn, Cal Kenneally & Cate Reid

It is the time of the Protestant Ascendancy in Co. Kerry when priest hunting is a favorite pastime. A young clergyman has escaped the gallows and fled to the Slieve Mish Mountains to be protected by a loyal band of rapparees from the pursuing Dragoon Sergeant Edward Tynan.

Seamus Lucason (MFA Brandeis University) lives half time in Dún Chaoin, Ireland and America where he has been a member of New York’s Actors Studio Playwrights/Directors Unit, and The Dramatists’ Guild of America.
The Rapparees was a winner of the Eamon Keane Playwriting Award at Listowel.
Siamese Tire in Tralee (Kerry Playwright’s Platform) took his play Dancing with the Devil beginning its developmental process in Ballydavid and again at The Blasket Centre in Dún Chaoin.
Seamus’ plays are a continuation of Austin Clarke and JM Synge’s focus on Erin’s peasant life. They have been produced in America and Ireland. The Prisoner most recently was produced at the Sean O’Casey Theatre in Dublin last May.
William Gibson: “Lucason’s tongue is gifted with a kind of Irish gayety, witty and charming.”
Norman Mailer: “To declare that Mr. L understands doubtless a lot in the ‘Spooky Art’.”
Celia de Fréine, Irish poet/playwright: “West Kerry set in 1916, is an evocative piece, rich in style and language.”
Michael O’Sullivan The Irish Democrat: “The realistic portrayal of strong, believable characters in the two pieces (West Kerry and The Last Rightboy) coupled with the author’s obvious relish for language and local speech rhythms marks him out as a storyteller.”
Sue Harrison, The Provincetown Banner: “Jim Lucason may define what it means to be a Renaissance man.”

Our Lady of Last Resort by Sorcha Hegarty

In the ghost of the Shelbourne hotel, Mamie Cadden, nurse and backstreet abortionist of the 30’s, 40’s &50’s is facing ghosts of her own past. Hers is the story of the people who fell through the cracks of the Free State’s Vision for Catholic Ireland, a vision we are still living under the shadow of.
About The Author
Sorcha is originally from Cork, and moved to Dublin in 2000 to study in Trinity. After her degree, she spent two years living in Latin America, working as a translator and soaking up the differences she found in culture, attitudes and mythologies.
Believing passionately in the importance of cultural heritage and the stories that have stood the test of time, Sorcha set up a storytelling business called Candlelit Tales with her brother Aron in 2014. They have brought ancient mythology to pubs, theatre festivals and music festivals around the country. As well as resuscitating old stories, Sorcha spends a great deal of her time writing new ones, be they plays, short stories, or films, and tries to find time to work on her first fantasy novel. Her theatrical works include: “The Thrill of the Chase” (2013), “The Voyage of Brian” (2014), and “The Dream of Eithlinn,” presented by Candlelit Tales in Smock Alley Boy’s School in August 2016.
Sorcha currently works as a freelance writer, researcher and storyteller in Dublin.

All Honey by Ciara Elizabeth Smyth

Ru & Luke are throwing a house-warming. They intend to. Warm their house.
However, their guests seem more interested in whispering in the box room than joining the festivities.
Infidelities, secrets and an uninvited guest mean that Ru & Luke will have to clean up more than red wine stains and glitter.

All honey. is a exciting new comedy written by Ciara Smyth that will make you think twice about who you confide in.
LUKE – John Doran
RU – Hannah Mamalis
MAE – Aoibhéann McCann
BARRY – Peter McGann
VAL – Ciara Elizabeth Smyth
About The Author
Ciara is a Dublin city based writer & performer. She is a founding member of Sad Strippers Theatre and also wrote their last two plays, Pour it out (2015) and TRIANGLES (2016). Each enjoyed sold out runs in Smock Alley, as part of Collaborations and Scene+Heard, respectively. Acting credits include; Hamlet (Bewley’s Cafe Theatre), The Winter’s Tale (The Teacher’s Club), Pic-a-Story (RTE Jr.), RAHDA (Black Ostrich Short Film – LA, Toronto, Chicago Film Festivals 2017) LIVE (Short Film – Cork Film Festival 2015)
Her upcoming writing includes touring TRIANGLES (Galway, Wicklow & Dublin) and All Honey which will be performed as a rehearsed reading in 2016 in The New Theatre. Ciara has a BA in Drama and is currently working as casting & production assistant for the Gate Theatre.

With Wolves by Nadine Flynn

With Wolves is a play with many narratives; it can be a play about a lying best friend, a play about a fumbling detective, a play about a missing child… but ultimately, With Wolves is a play about the crippling mental anguish of man due to the effects of the world around him. The world of the play is not one in which we are familiar, with contradictory characters and distorted gender roles, we are presented with a world that suggest ‘all is not what it seems’, one which leaves us guessing and uncomfortable.
About The Author
Nadine graduated from University College Dublin in 2014 with an honours degree in English & History. She was an active member of UCD’s dramsoc as a stage manager and playwright. In 2015, Nadine graduated from The Lir Academy of Dramatic Art, where she got her MFA in Playwriting. There she studied under the guidance of Graham Whybrow of the Royal Court, and guest mentors which included Gavin Kostick and Conor McPherson. Nadine’s previous work includes, The Posi+ives (UCD dramsoc), The Price of Tea (The Lir), With the wild Wolves (rehearsed reading, The Lir) and Running With Dinosaurs (Fringe Festival 2015, Smock Allies Scene + Heard 2015).
Nadine is Co-Founder of Break Fast Theatre and Co-Artistic Director of dreamback. Nadine was the Theatre Editor of The University Times for the 2015 period and was a regular contributor to Meg.ie. She currently works for Dublin Theatre Festival.
Directed by Rachel Bergin, performed by Ste Murray, Emer Heatley, Michael-David McKernan, Eavan Gaffney, Darren York & Colm Gleeson

ALL TALK by Emily Gilmore Murphy

ALL TALK tells the story of Malachi, a socially inept teenager, and his relationship with Elizabeth, a troubled classmate who has gone mute after the death of her baby sister. Malachi wants to help but he’s lost somewhere between reality and his online life. Can he trust the faceless voices on the Internet? Or is he being dragged down a path that will only bring out the worst in him?
About The Author
Emily was born in 1990 in Dublin, Ireland. Her debut novel You and I, was published in 2012 with Transworld Publishing, Random House. In 2014 her second novel One Chance was published. Both books have been published in Ireland, United Kingdom and Germany and have received high critical acclaim. In 2014 A Boy called Nedd, Emily’s debut play, was showcased with Druid Theatre Company, directed by Rosemary McKenna and produced by Garry Hynes. A Boy called Nedd had its world premiere in 2015 with Theatre Upstairs and Bitter like a Lemon Theatre Company, directed by Karl Shiels. It then went on to be shortlisted for The Stewart Parker Trust in 2016. Emily is represented by literary agent Marianne Gunn O’Connor and is currently editing her new novel, she is also an active member of Bitter like a Lemon Theatre Company.
Directed by Ciaran Gallagher, performed by Sean Doyle, Juliette Crosbie, Patricia Patience, Kate Gilmore, Aislinn O Byrne & Emmet Mahony 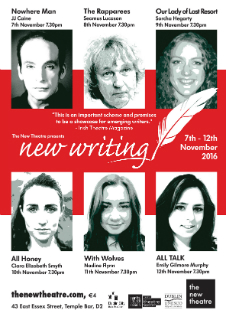