1969 adaptation of Satyricon, a novel by Petronius, written in the year 65.

The film Satyricon is an adaptation of a novel of the same name by Petronius, probably written in the year 65. Only fragments of the text have survived, less than 1/5 of the original at best. Most of the fragments deal with the adventures of the ‘knave errant’ Encolpius and his lover, the slave Giton, who has an eye on a new boyfriend, Ascyltus. Another surviving fragment deals with an evening of feasting and debauchery in the house of nouveau-rich Trimalchio. To these two strands, the Satyricon scriptwriters added tales and images from other classical Roman texts, and some of the most memorable scenes in the film (the earthquake, the minotaur), in fact do not come from Petronius.

It seems that the original story included the hero’s seduction of various women, but the surviving text, and the film adaptation, are consistently and ostentatiously concerned with male homosexuality. Whether heterosexual director Federico Fellini was staging a fantasy of gayness or not, his film certainly helped to create the ‘gay camp decadent look’ in the movies. Fellini’s Satyricon has an aesthetic of gilded excess, a languid tempo, and a narrative of loosely-connected moments hovering between pleasure and danger.

Unexpectedly, the book (but not the film) is full of sexual assault and rape between men, often described as irrelevant or ambiguous, while the film (but not the book) presents women as base lumps of flesh, which only exist to please or aggravate men. Was the writer Petronius an outraged citizen denouncing the moral dereliction of the rich in his time? Or was he celebrating an amoral new order where indulgence rules? We don’t know. As for Fellini, it’s celebration all the way. 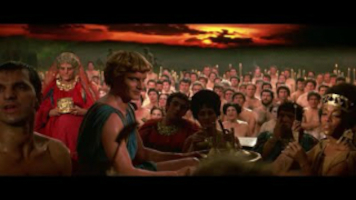