Now in its third year, the Feminist Film Festival Dublin aims to counteract the mis/under-representation of women behind and in front of the camera. The FFFD is run voluntarily and all profits go to the women of Sasane Nepal. We are hugely grateful for your support and interest. Hope you enjoy!
This year our celebration of women in film focuses on the theme ‘Othered Voices’, with a programme of films capturing the female voice in its many forms.
Historically little attention has been paid to women’s voices on-screen and commentary often stresses the need for women in the industry to ‘speak up’. The continued impact of Laura Mulvey’s 1975 analysis of the visual objectification of women in cinema (‘the male gaze’) has distracted from their vocal and verbal representation. Our programme addresses this, highlighting women’s literal and figurative voices, including interpretations of ‘the voice’ as a character’s, or the filmmaker’s, or a particular point of view.

13:00: Mother Ireland (Anne Crilly, 1988. 53min) + The Sea Between Us (Caoimhe Butterly, 2016. 47min) €10
‘Mother Ireland’ is a familiar image, often depicted as ‘an Irish version of the Virgin Mary’. This documentary uses the depiction as departure point for a discussion of nationalism and feminism, featuring a number of well known republicans and feminists. Mother Ireland gives a voice to this mute icon, by allowing Irish women to verbally express their relationship with the imagery.
In contrast, The Sea Between Us, filmed on the shores of the Mediterranean, features those who have left their homes behind and are embarking on dangerous journeys in search of refuge. A timely and important film that gives a platform to some remarkable voices, while subtly challenging reductionist stereotypes.
15:00: The Piano (Jane Campion, 1993. 121min)
[& short January Hymn, Katherine Canty] €10
In its depiction of a mute woman’s arranged marriage in mid-19th century New Zealand, Jane Campion’s The Piano raises questions not just about the representation of women’s voices, but also about how best to represent other marginalised groups. Though the film received some criticism for its presentation of the Maori people, the central character’s withholding of her voice, and use of music as an alternative to speech, provides one of the most remarkable treatments of the female voice on screen.

12:30: Margarita, with a Straw (Shonali Bose, 2014. 100min)
[& short Between Us, Mairéad Kiernan] €10
Margarita, with a Straw focuses on Laila, a rebellious Indian teenager with cerebral palsy trying to find her independence. As well as representing a young woman with a speech disorder, the film departs from typical coming-of-age movies due to its own radical agenda: Margarita is one of the first Hindi films to get LGBTQ sex scenes past a strict board of censors.
15:00: FFFD Short Film Programmme €10
A diverse, fascinating and entertaining selection of Irish and international short films:
Bombing, Gloria Mercer | Girl, Megan K. Fox | Miss Z, Niamh McKenna | Murmur, Aurora Fearnley | Reel: Irish Women, Elaine Gallagher | Slow Down, Megan K. Fox | Terminal, Natasha Waugh | Why Can’t You See Me? Andra Roman
Filmmakers Roundtable hosted by film programmer Eibh Collins (Galway Film Fleadh Shorts, Irish Screen America, Indie Cork, Irish Film Festival London)
FFFD16 BEST SHORT FILM WINNER ANNOUNCEMENT (Prize: a day’s grade at Windmill Lane Studios)
17.30: FREE TALK: Screening Women’s Voices (Dr Jennifer O’Meara)
Why do women rarely serve as voice-over narrators? Did the empowered ‘fast-talking dame’ die out with the screwball comedy? And is ‘The Bechdel Test’ really a good way to measure female characters’ verbal representation? This talk will consider these and other questions, looking at historical and contemporary trends in the treatment of the female voice in cinema.

12:00: Regarding Susan Sontag (Nancy Kates, 2014. 101min)
[& short The Bus Trip, Sarah Gampel] €10
Regarding Susan Sontag provides rich insights into the life of one of the most influential and outspoken critical thinkers of the 20th century. Patricia Clarkson narrates, reading as Sontag from her books and journal entries. This documentary charts Sontag’s public and private life through her writing, politics, personality and bisexuality. Incredible archive footage and wonderful narration establish an original and poetic tone fitting for its subject.
14:30: Mustang (Deniz Gamze Ergüven, 2015. 97 min)
[& short Home, Zainab Entezar] €10
What happens when women are denied a voice? Deniz Gamze Ergüven explores this question in multi-award winning ‘feminist escape movie’ Mustang. Beautifully shot and exceptionally performed, the Oscar-nominated tale (writer/director Ergüven’s debut), tells the story of five sisters punished for ‘immoral’ behaviour in rural Turkey. A voice-over by the youngest sister frames this rousing portrayal in terms of solidarity and empowerment.
17:00: The Seashell and The Clergyman (Germaine Dulac, 1928. 40min) (with live score by Diarmuid MacDiarmada & Suzanne Walsh)
+ Black Box (Beth B & Scott B, 1979. 21min)
[& short Spirit Away, Betina Kuntzsch ] €10
An early feminist filmmaker, Germaine Dulac was an integral part of the ’20s French avant garde movement. Women’s voices are felt from behind the camera, as well as in front of it, and The Seashell and the Clergyman – a silent film dealing with male obsession through a surrealist and experimental form – speaks volumes of the director’s point of view. The live film score contributes a fresh and real-time voice to this 1928 masterpiece.
The Seashell and the Clergyman is paired with a classic of recent feminist counter-culture, starring artistic icon of our time Lydia Lunch. In opposition to Dulac’s silent films, Lunch speaks ad nauseum in Black Box and narrates with a vicious anger, a voice of resistance and resilience. Artistic film occupies a special place within feminist visual culture and this double bill gives a taste of something other than the ubiquitous mainstream narrative.
18:30: IRISH PREMIERE! Amaka’s Kin: The Women of Nollywood (Tope Oshin, 2016. 43min)
[& short shhh! Leah Thorn] + ‘Othered Voices: Women’s Voices in Media Industries’ Panel Discussion €10
Amaka’s Kin looks at the experiences of female directors working in the hugely prolific and male-dominated Nigerian film industry, known as ‘Nollywood’. Dedicated to the memory and successes of the late filmmaker Amaka Igwe, who famously said ‘Nollywood is a global movement’, the film uses interviews to chart the work of the women striving to make their mark in a man’s world.
The film will be followed by a panel discussion: “Women’s Voices in Media Industries”, chaired by Prof. Maria Pramaggiore, Head of Maynooth University Media Department.

All FFFD screenings are subject to license.
Please arrive early.
There are no ads or trailers, the first film starts at the time listed. Where there is a feature + a short, the short will screen first.
All profits from the Feminist Film Festival Dublin go to Sasane in Nepal, a charity organisation run by, and for, victims of sex trafficking.
Thank you for your support.
Find us on social media or say hi at info@feministfilmfestivaldublin.com 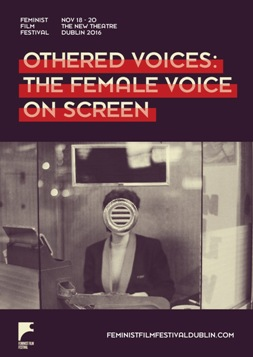