“A bell clanged upon her heart. She felt him seize her hand:
-Come!
All the seas of the world tumbled about her heart. He was drawing her into them: he would drown her”

“Mrs. Mooney dealt with moral problems as a cleaver deals with meat: and in this case she had made up her mind” – The Boarding House
“They led her to the table amid laughing and joking and she put her hand out in the air as she was told to do. She moved her hand about here and there in the air and descended on one of the saucers. She felt a soft wet substance with her fingers and was surprised that nobody spoke or took off her bandage.” – Clay

Birth. Love. Death. 100 years ago to now.
Immerse yourself in the hidden worlds of Eveline, Clay and The Boarding House, three short stories by one of the 20th Century’s greatest writers, James Joyce. Dubliners’ Women shines a light on the female narratives in Joyce’s iconic collection of stories, and their resonances with Ireland today. 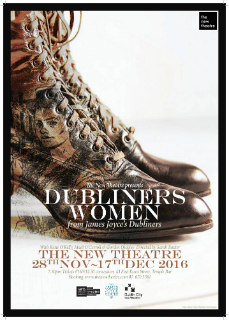