“Martha: I can drink you under any table you want, so don’t worry about me.
George: You got the prize years ago. You’ve won every Abomination award.
Martha: I swear if you existed I’d divorce you.”

Anna Albelo’s film is not an adaptation of Richard Albee’s play Who is Afraid of Virginia Woolf? as one may expect, about a couple of drunken pseudo-intellectuals locked in an orgy of mutual hatred. Albelo’s is a lesbian adaptation of the 1966 film adaptation of the play – or rather, her film is about a filmmaker filming an adaptation of the film adaptation. This may seem like an odd idea. It certainly shows how the impact and popularity of adaptations often bypasses the texts that inspired them. But what is an ‘original’ anyway?
There is an old homophobic argument claiming that pansies and tomboys are copies of real women and real men, and that lesbian and gay couples mimic heterosexual marriage. Queer critic Judith Butler (adapting the philosopher Derrida) replied to that by pointing out that we live among copies of copies of copies, and anyway it is always the ‘copy’ what creates the ‘original’. Without copies, the originals simply would cease to exist as such. So who is the almighty creator here?

At forty years of age, the protagonist of Vagina Wolf, Anna, is living in a friend’s garage and making a living by clowning it in a vagina body-suit. Clearly, Anna needs to find herself, and find a direction in life, so she comes up with the perfect plan: to launch a career as film director with an adaptation of an adaptation. Mike Nichol’s ‘original’ film, which became a cult classic thanks to Richard Burton and Liz Taylor’s rabid performances, was black humour with bite.
Albelo’s film inverts the priorities, and her version is a refreshing splash of farcical humour, with a touch of grey (in the visit from her mother/maker), and a perilous brush with pink (in the romantic fairytale). You may have noticed that the first-time writer-director-producer-protagonist and adaptor of Vagina Wolf, Anna Albelo, is called Anna, like the protagonist of the film… Just a coincidence, no doubt. 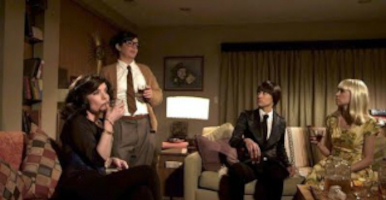