In the Dark Horse Pool Academy, the games go on long after closing time and only the toughest customers last the night.
Oren Collins, a small-time thug and the hall’s best player, must finally confront the three main demons afflicting his life, both inside and out: the death of his brother, a long-overdue debt to a loanshark, and his conscience.

As time steadily runs out and tensions boil viciously over, Oren deceitfully enlists the help of two people to aid him in meeting his fate: Des, his uncle and the hall’s manager, and Joseph, a visiting American student with a mysterious link to Oren’s dead brother…

A play of invidious secrets and broken masculinity, The Collector simmers to a disquieting conclusion.
The Collector is the debut play of Daniel Wade, directed by Cian Ó Ceallacháin in association with Underdog Theatre Productions.
Funded through an online crowdfunding campaign hosted by Kickstarter. 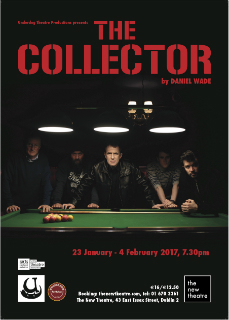 Presented by Daniel Wade in association with Underdog Theatre Productions