Happy Birthday Jacob is the story of two brothers, Jacob and Lucas, who, after being abandoned at a young age, have been forced to develop a life which consists of secrecy and strict routine. The story exists between the father leaving and the foreboding imminence of his return. That is until Mary, their mother, arrives abruptly, which slowly severs the bond between the two brothers. Lucas’s fantastical notions of a family reunited directly clashes with Jacob’s embodied reality of rejection and abandonment. Jacob with the help of Terry a neighbouring girl try to keep this constructed family afloat while Lucas drifts towards an idea that he has only been able fantasise. Time is ticking closer to Jacob’s 18th birthday, a day in which everything that has been built must fall. 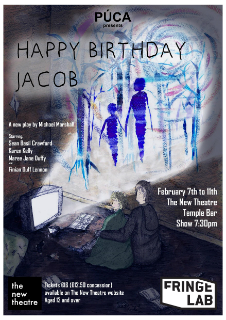 Suitable for 12 years and older