Cora Leah and I

“In a haunted house where the tape is always rolling, it’s hard to get away with anything, let alone murder.”

Leah has been running away, Cora has been standing still and Egan has the whole thing on tape. All of them are desperate to forget, to move on, move past the event that shattered their lives. Unfortunately it’s hard to forget. It’s even harder when the camera is always on you and the footage is there, waiting, daring you to take a look.
BridgeTalk Theatre’s debut production is a harsh look at those hiding behind and in front of the camera played back for you in HD. 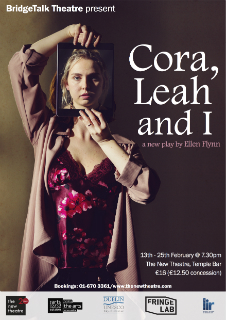