1964 adaptation of the novel Quicksand, by Junichiro Tanizaki, serialised in 1928-30.

“Why have you kept such a beautiful body hidden!” I asked reproachfully. “It’s too much! It’s just too much!”
– Junichiro Tanizaki, Quicksand (1930)

The pioneering lesbian novel Quicksand was published in Japan in serialised form in 1928-30, but it has some of the feel of a 1970s Latin-American soap opera. The key note is Hysteria, the refrain is Deception. In Quicksand, everyone is deciving everyone else, in increasingly unlikely plot turns, as the characters get deeper and deeper into the quicksand of infatuation. The shadow of Dorian Gray looms large in this season of the Film Qlub, and we find it here too… The beautiful and psychotically-manipulative young Mitsuko pulls easy targets towards her, and as the weight increases, so do the chances that they’ll all sink together.

The novel seems partly inspired by another Irish classic, Le Fanu’s vampire-tale Carmilla, with a narrator whose intentions remain obscure. In Quicksand, the story is told by the cheerful widow Sonoko directly to the author, Tanizaki himself, in a recorded conversation. This is an old literary device, which Tanizaki exploits really well, giving minute physical descriptions of letters, contracts, evidence he has gathered. This kind of descriptive writing would not make sense in a film, and plays no part in the 1966 adaptation (they’ve been five adaptations to date).

The film simply presents lesbian love as a kind of paroxysm, as a series of incontrolable and violent seizures. The book is a meditation on the power of lies, proposing that love is madness and life is fiction. The adaptation is a David-Lynch-esque queer spectacle, a film made to astonish. Surrender to it. 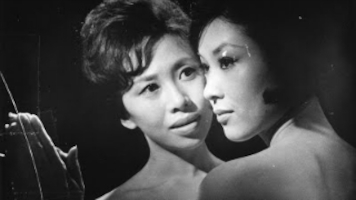