Fergus and Gar have been cleaning drapes for years. Daniel has only just started and he is as fresh as a Blossom.
Together the three men work day in day out in a warehouse tucked away in a Dublin industrial estate preparing the drapes for their next outing.
Fergus is grateful for the work; in post-recession Ireland you take what you can get, and with a baby on the way he needs to provide.
Gar had no intentions of staying so long in a once temporary job, but with his prospects narrowing where else can he go? and Daniel, he just wanted to save some money before trying to go back to college.
When Mancunian Layla opens a coffee shop beside the drapery Daniel begins to enjoy coming into work. But why did she make the move from England to work in an empty industrial estate and what’s stopping her from going back?
Between singing songs and drinking endless cups of tea to break up the day the four get to know each other over the months but they don’t all like what they find out.
One thing is certain, with management ever present through the CCTV camera in the corner, work cannot slow down.

David Clune is a playwright, teacher, performer and songwriter from Dublin. He is a graduate from DIT Conservatory of Music and Drama and is currently based between Poznan, Dublin and London. In December 2013 he released his debut album, Shine, under the name Dahi Jim, before heading off for a 9 month tour of London clubs. In his second year in London he was accepted to the annual playwriting workshop with John Burgess, former head of new writing at the National Theatre. This is his first play. 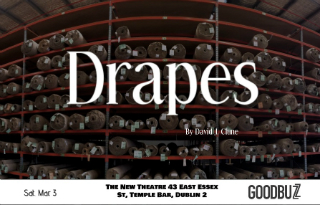