– An Cat agus an Ghealach
– Purgadóir – The World Premiere of Purgatory, translated by Gabriel Rosenstock
– Poetry and Song

International Award winning theatre-company Mouth on Fire presents two of William Butler Yeats’s greatest plays for Seachtain na Gaeilge 2017 – together with a selection of Yeats’s poems sung and spoken in an afternoon of great entertainment, starring some of Ireland’s best known actors.

The plays will be interspersed with some of Yeats’s greatest poetry – Easter 1916, The Song of Wandering Aengus, The Lake Isle of Innisfree – performed by Cathal Quinn and sung by musician Enda O’Reilly. 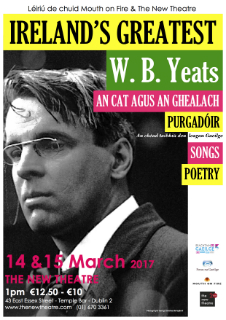