A call to arms. War Poet Francis Ledwidge (Ethan Dillon) is torn between his love for Shivvie (Katie O’Kelly), and Ellie (Amy O’Dwyer), his friend and confidante. In spite of their fears, he enlists in Captain Dunsany’s (Ian Meehan) regiment, and is dispatched to Suvla Bay.
Excelling as a sniper, Ledwidge distinguishes himself at Gallipoli, but the poet remains conflicted.

BBC Stewart Parker Award winning writer Gerard Humphreys’ ‘LEDWIDGE’, explores the poet’s personal conflict during World War I and his early life as a trade union activist in a class ridden society on the eve of revolution. ‘LEDWIDGE’ presents its subject in the context of his art and politics, bringing to life the adventurous spirit of Ireland’s greatest war poet.
This play will celebrate 100 years since Ledwidge’s death and 20 years presenting new writing by The New Theatre. 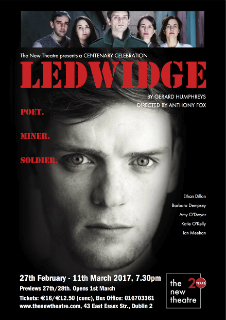