Nagisha Oshima’s Gohatto is partly inspired by Ueda Akinari’s short story of 1776 “The Chrysanthemum Vow”, about two samurai warriors bound by their love for each other. One of them, Akana, leaves on a soldiery mission, promising to return home on the ninth day of the ninth moon (the day of the Chrysanthemum Festival). On the agreed day, Akana returns, but he refuses food and behaves strangely, and eventually confesses that he has become a ghost.
During his trip, Akana had been imprisoned, and rather than break his vow and his beloved’s heart, he had killed himself, in order to keep his promise and return on the agreed day. Ueda Akinari’s parable of steadfast love was itself an adaptation from an old Chinese tale where the original characters were not samurai, so this version linked a lover’s loyalty to the honour-code of Japanese warriors. “The Chrysantemum Vow” was published in a collection dealing with demonic, cruel, and neglectful heterosexual lovers, so in the book, as scholar Anthony Chambers has explained, thanks to our two samurai “erotic friendship between men . . . becomes a sort of model for human relationships’.

Rather unexpectedly, the film Gohatto is an erotic detective thriller set at the end of the feudalist Edo period. In the script, a new arrival in the imperial police, the beautiful and aloof (once again, Dorian-esque) young trainee Kanō, appears to be the embodiment of samurai values and skill, and the stupefying devotion he inspires in commanders and soldiers alike is a test to everyone’s self-control.
The Chrysanthemum blossom was a symbol of gay male sexuality in Japan, hence the title of the original short story. In the film, a Chrysanthemum tree is only seen for a few (crucial) seconds, and there is no trace of ghosts, or of Samon and Akana’s tragic love. This is because Gohatto is concerned with the disappointing decadence of samurai ideals and samurai relevance in late nineteenth century Japan. The film, set one hundred years after the romantic idealism of “The Chrysanthemum Vow”, begins by nodding to Ueda Akinari’s story, and ends by decapitating it. 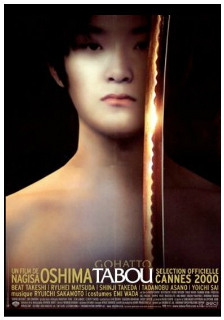