“Kealyn towers as The Citizen…”
“Triumphant”
“The Cyclops is alive and well and on stage…charms and impresses…Reid’s direction is a combination of imagination and fidelity to his subject…the production is an uplifting and cheering piece of Joyceana. The spirit comes shining through”

– THE SUNDAY INDEPENDENT
“Cyclops is a masterstroke!…the adaptation shows Joyce as a writer who can capture the humourous Dublin idiom as well as O’Casey”
– THE IRISH MAIL ON SUNDAY

Set in Barney Kiernan’s pub, where a one eyed nationalist “THE CITIZEN” violently defends the superiority of the Celts. Actively encouraged by his increasingly drunk and loquacious companions as they mix gossip, florid and ridiculous tales of Irish history. The unfortunate Bloom enters. Molly’s liaison with Blazes Boylan sits heavy on his mind. The pub’s patrons dislike Bloom and all are aware of Molly’s infidelity. Bloom and The Citizen row about race, nationality while the others snigger about Bloom’s inability to satisfy his wife’s needs.
A play full of drunkenness, song, history, infidelity and the everlasting question of who belongs where. Using the chapter as a framework to hang the story Bloom’s troublesome day, it’s a tragi-comic slice of Dublin life that holds more than enough resonances for the Ireland of today. 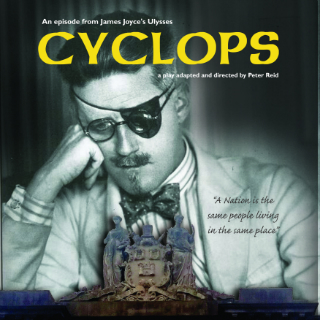