1988 adaptation of the three plays in Torch Song Trilogy, by Harvey Fierstein, of 1982
“Yeah. I’m among the last of a dying breed. Well, once the E.R.A. and gay civil rights bills have been passed, me and mine will be swept under the carpets like the blacks done to Amos, Andy, and Aunt Jemima. That’s all right. With a voice and a face like this, I’m not worried. I can always drive a cab. And that, chillun’, is called power. Be it gay, black, or flowered it always comes down to the survival of the majority.”
– Harvey Fierstein, in the play The International Stud (1978), later part of Torch Song Trilogy (1982)

The film is an adaptation of three one-act plays on the same character, Arnold Beckoff, all together four hours long. The film was scripted by the original author, the multitalented Harvey Fierstein, who starred in both the theatre production and the adaptation (Mathew Broderick played Arnold’s son on stage and Arnold’s husband in the movie). The film opens like the play, with a monologue directly to the audience, and after that the stage is forgotten in all but in the talk-heavy story. The film omits (regrettably) a hilarious sex scene in a darkroom, as well as (mercifully) the endless discussion of Arnold’s lover Ed’s ‘problematic’ bisexuality. The adaptation also invents a (rather sweet) first-meeting scene between Arnold and partner David.

A ‘torch song’ is a melodramatic rendition of a love story, romance on an epic scale, and our story is concerned with the five loves in torch-song singer Arnold Beckoff’s life: Ed, Alan, his son, his mother, and himself. This is a positive portrait of a gay person who respects himself and demands respect, from the first second of the film to the last. Shocking to think how rare this is in the stories others have told us and we have told ourselves.
Arnold’s whip-tongued queen, maddeningly closeted lover Ed, dangerously-perfect partner Alan, Arnold and Alan’s lovable-rogue foster-son David, and Arnold’s dark tornado of a mother… all sound like excruciating clichés on paper, but in fact they feel so real that you will think you are standing in that dressing room, that alley-way, that cemetery, that cabin in the country, and that sitting-room. Both the play and the film are about parenting too –about the trick of breaking with the past, knowing you are cursed to drag it along with you.
This is the conundrum of film adaptations themselves, and if you wish to be enlightened, look no further than the great Anne Bancroft as the ‘ma’ of professional drag artist Arnold. He may be one of a kind, but is it a coincidence that she comes across as the ultimate drag queen? 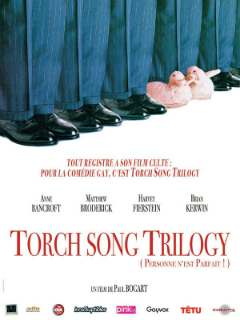