Home  /  Theatre   /   The Confirmation Suit
Back to events

Brendan Behan is twelve years old and about to make his confirmation. It is a coming of age moment for all Catholic boys, full of excitement and promise. That’s how it is for Brendan until he learns that his suit is to be made by an elderly seamstress, Miss McCann, who lives upstairs in their tenement house.

Miss McCann specialises in making shrouds for the dead. As Brendan’s father Stephen remarks,”people are only dying to get into one of her creations.” It is not a good omen. Brendan is terrified that his suit will be anything but fashionable and he lives in dread of what he may be forced to wear on his big day.
As the story unfolds, the young Brendan becomes more and more agitated. In the end we know that something has to give. The question is whether Brendan will hold it all together or implode.

Written by Behan in 1953, The Confirmation Suit is filled with humour, insight and pathos. It is a story that still resonates today, more than fifty years after its composition.
This is a stage adaptation not to be missed.

Adapted for the stage by Peter Sheridan (Minding Frankie, Borstal Boy, Diary of a Hunger Strike)
Performed by Gary Cooke (Après-Match, I Keano)

Following its successful run in May of this year at Bewley’s Cáfe Theatre, The Confirmation Suit by Brendan Behan (adapted for the stage by Peter Sheridan) is back in Dublin, this time at The New Theatre, Temple Bar. Show opens on Monday, July 24th for a 2 week run.

Gary Cooke, well known to TV audiences for his Après Match impressions of another controversial character, Eamon Dunphy, narrates as Behan and “captures the author’s rollicking personality…boisterous…anarchic…bringing the entire story to
life” (NoMoreWorkHorse)

Having both worked together on the recent production of Meet The Quare Fellow, where Gary also played Behan, Peter and Gary feel something special happens when they combine with Behan’s work. 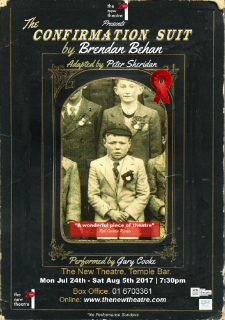 Brendan Behan. Adapted for the stage by Peter Sheridan