Raymond & Dutch in The Case of the Last Green Bag

With the future prospects of their generation uncertain, and a mysterious disappearance of their most valuable possession after a party the previous night, two broke, bored, and otherwise unoccupied actors take up the mantle of previous great men before them and pretend to be tougher than they are.

With nothing but their wits, endless free time, and enough liquor to make Borris Yeltzen think twice, they take on the mantle of film noir and shift through the characters of the city’s underbelly (all strangely the same person) on their final case. 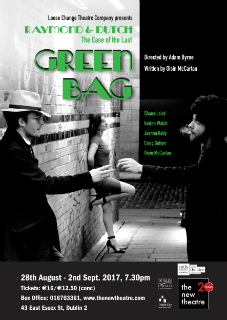