Bat the Father, Rabbit the Son

It’s Dublin in the late 1980s. The IFSC is a newly built jewel. Rabbit is a self-made haulage magnate. He’s up to his neck in the kind of deals destined to redefine the word “tribunal”. But something’s wrong. He cuts a deal with his underling Keogh to help him find his lost moorings. This quest is hampered by eruptions from his deceased father Bat, former Citizen Army volunteer and pawn shop assistant. The struggle between father and son, past and present, imagination and reality, spans Dublin. Their crazed voyage out of Howth and up the River Liffey builds to a climax described by The Guardian as “one of the strongest dramatic conclusions I’ve ever seen”.

An explosive psychological analysis of the generation that led us to Boom and Bust. Written 30 years ago, ‘Bat the Father, Rabbit the Son’ prophesizes the birth of The Best Little Country in Which to own a Vulture Fund. Bat The Father Rabbit The Son was first presented by Rough Magic for the Dublin Theatre Festival in the Mansion House in 1988. It toured to New York, Glasgow, Edinburgh, Australia and New Zealand, as well as all over Ireland

About the author
Donal O’Kelly is a playwright and actor. Previous solo plays include Edinburgh Fringe First winners Catalpa and Fionnuala, also Hairy Jaysus, and Jimmy Joyced! Other plays include The Memory Stick, Little Thing Big Thing, The Cambria, and Asylum! Asylum! and The Dogs. Recent acting roles include Jimmy’s Hall and Katie Roche in the Abbey Theatre. 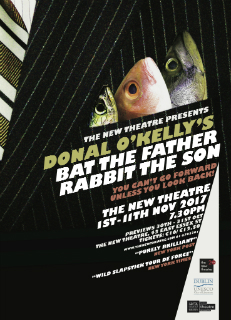