The Restoration of Hope

Home  /  Theatre   /   The Restoration of Hope
Back to events

Following the great success of Temptress which premiered at The New Theatre, Philip St John’s new play is a darkly funny, atmospheric drama that explores lives lived in the perilous zone between this world and the next.
Hope Whyte is having a diabolical Christmas. In a Dublin office painted with mysterious symbols, she wakes up: has she been restored to life or is her memory of being murdered a nightmare? And what is she to make of her self-declared Mentor, Larry McGrath, and his insistence that she must honour the terms of a supernatural contract?
“a surreal, supernatural black comedy” The Sunday Independent
“the story is intriguing…there is much to enjoy in this supernatural tale” No More Workhorse

A co-production by Speckintime, High Seas Productions and The New Theatre.
Photos by Ste Murray 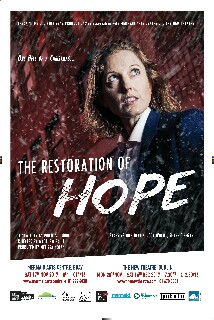