Fun, fast paced and fearless, ‘Save + Quit’ tells the powerful and empathetic stories of four humans.
‘Save + Quit’ was chosen as the winner of the London Student Drama Festival 2015 and completed a hugely successful ***** run at the Edinburgh Fringe Festival and VAULT Festival in London. It is back again following a sell-out run in The New Theatre in 2017.

Two dispirited Dubliners and two lonely Londoners share glimpses of their daily lives, re-enacting all their diverse daily encounters. No set, no props – simply four humans telling stories that reveal and explore the isolating effects of life and death in the big city.

Witty and moving, this energetic four-hander addresses multiple themes with candour and empathy. Vignettes of racial tension; love and loss; housing problems and political uncertainty combine to create a fluid and engaging narrative that is bang up-to-date, given Ireland’s exposure to the ongoing crises around refugees, homelessness and Brexit.
With fast paced multi-roling and brave, compelling storytelling, ‘Save + Quit’ speaks to the audience, encouraging them to reach out and connect with one another despite – or perhaps because of – the seemingly indifferent and often hostile nature of city life. 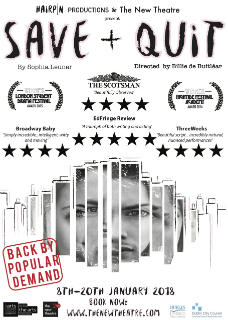