Peru: Anti-homophobic protection law repealed by Congress in May 2017.

UNDERTOW / Contracorriente (Dir. Javier Fuentes-León, 2009)
Magic realism, village life, loving yourself.
It is easy to be out in a cosmopolitan, urban environment. But when you are the only queer in the village, and you are a popular and respected guy, and you have the love and devotion of a wonderful wife… why rock the boat? Ah, but being yourself may just be a matter of life and death.
–A beautiful and gentle parable about queerness.
www.filmqlub.com 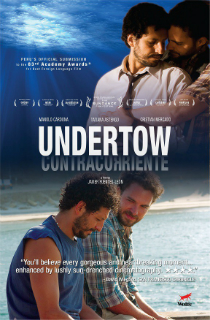