PUSHBACK is a tale of complicated love on a dystopian post war island off the coast of Europe some time in the near future. Mary’s husband has disappeared. Her daughter finds a young male immigrant, Tin, stealing food from her fridge one wet afternoon. From this encounter the lives of the four become inexorably linked and a tale of love and murder begins…

About The Author
Elizabeth Moynihan trained under Deirdre O’Connell at Focus Theatre Stanislavsky Actors Studio. She has worked in Ireland and the U.K as an actor in Theatre,T.V. and Film, recently in Black Mirror on Netflix and Fantastic Beasts And Where To Find Them as well a being an award winning playwright. Her first play Cider Queens, won the Zebbie( Writers Guild of Ireland award for best radio series.

Her play Tic followed Published by Liberty Press 2007. Focus theatre commissioned a full-length version of ‘Tic’ in 2010.Which is now a feature film at casting stage on going to print. Blood in the Alley theatre commissioned a series of workshops of her play ‘In the Absence of Snow‘ Her play ‘Walnuts remind me of my mother’, sold out the first week of the Absolute International Gay Theatre festival 2009 and was nominated at the Absolute festival awards that year.
‘Slaughterhouse, Swan’ was the hit of the Absolute Gay theatre festival 2010 where it received five nominations and three awards including Best New play, Best Actress and Best Visual Production. Her play ‘Pinching for my Soul’ was staged in June 2011 directed by Blanche McIntyre at the Focus Theatre. Elizabeth’s made her debut at the The Abbey theatre with their commission of a short play entitled ‘Marvel’ which was then developed into a full length play where it received a rehearsed reading at The hotbed festival in Cambridge 2012. and production at the Project in 2014 directed by Aoife Spillane-Hinks. Her play for 12-15 year old on the subject of FGM I Want To Know was staged at the Abbey theatre 2015 for international children’s day. 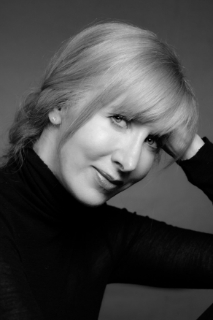