Home  /  Theatre   /   The James Connolly Festival
Back to events

Opening of Festival with an exhibition “Cowgate to Citizen Army” Free entry
19.30-21.30: Play “Pull Down a Horseman” by Eugene McCabe performed by Clones Drama Society, Cast Brian O Harte and James Cleary price €10
21.30-late: Red Room chat, discussion, fun.
A classic of Irish political theatre, Pull Down a Horseman was written for the 50th Anniversary of the Rising in 1966. Based on actual events, Eugene McCabe’s play depicts a secret meeting between Connolly, Pearse and other revolutionary leaders held to take that momentous leap.
Although just 40 minutes long, the play is packed with historical detail as their arguments and ideas are pitched against each other.
Performed by the Clones Drama Society, featuring Brian O’Harte and James Cleary.

“A Connolly//Theatre concert with….Ross Breen and October Fires” price €13
23.00-late: Red Room chat , discussion, fun.
Kildare solo artist Ross Breen released his debut, self-produced album When I Met The Devil in 2011 to widespread acclaim.
Since then, Ross has been awarded the title of Ireland’s Best Unsigned Singer-Songwriter by Newstalk FM’s The Tom Dunne Show; his song Monet having been chosen for extensive airplay from over a thousand submissions. Ross’ work has also been featured on various compilation albums and his song Life Support was chosen as the title track for a Delphi Records release in aid of suicide outreach and awareness body, Pieta House.
October Fires are a genuinely exciting new band with an enchanting, deep and unique style. A tight-knit 4 piece, their music can be described as alternative pop rock.
Fusing their various musical backgrounds, which include choral, classical, pop, folk, soul, funk and rock, their sound is a breath of fresh air in an industry dominated by the generic.
Their twin lead vocalists Carol Somers’ and Lisa Bakers’ intricate use of harmony, weaves an absorbing vocal sound.

“Ronan Wilmot in conversation with Robert Ballagh” Price €8
21.30-late: Red Room chat , discussion, fun.
One of our highlights this year will be an in-depth discussion with artist and activist Robert Ballagh hosted by actor and impresario Ronan Wilmot. The pair will explore Ballagh’s past, future and his views on where art and politics continue to collide. In the past, Ronan has held similar ‘in conversations’ with others including musician and activist Glen Hansard.
Ronan has worked all his life in film, theatre, TV and music as an actor, director and playwright with The Abbey Theatre, The Project, The Focus and The Royal Shakespeare Company, where he appeared in several productions, including Trevor Nunn’s award-winning production of Juno and the Paycock. He has also worked with the 7:84 Theatre Company, The Young Vic and the Royal Court Theatre in London.

The Continued Relevance of Marx: Lecture by Dr. Stephen Nolan Free entry
19.30-23.00: “Tres Billboards for the Republic“ – Film ,Play and Music in support of Friends of the International Brigades Ireland FIBI price €10
23.00-late: Red Room chat, discussion, fun.
A musical, artistic and historic Celebration of Ireland’s International Brigaders with Jurama, a film about Charlie Donnelly, the Republican Congress veteran and poet. We also present One Way or Another, a play on the life of Dinny Cody who was killed at La Rosas 1937, while historian James Durney will give talk on the life of civil war hero Frank Conroy. Finishing up the evening with music from the wonderful Sive. 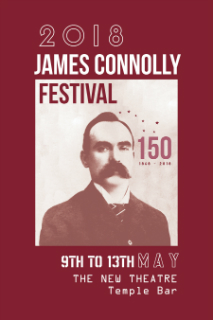