The Letters of St. Declan

The Letters of St Declan is a play about rage. It concerns the life of Declan, a failed priest, in the throes of constant attack from a savage inner self. This demon is the inner voice that we all have and the play explores the potency of this inner voice.
In this play the inner voice or Face, presented as a head that appears out of various parts of the furniture, is a coruscating and savage tormentor.
In course of the dialogue between Declan and Face, we get a portrait of a childhood in 60’s/70’s small town Ireland. We witness the savagery that poorer children were exposed to and how aspiration was crushed by a theocratic society.
The play aims to be a funny, outrageous, and poignant exploration of an tormented individual’s life, and a chronicle of an era where the church was a powerful, and maliciously controlling influence on the lives of ordinary Irish people.

This is Peter Gowen’s third play. STONEPICKERS was premiered in the Dublin Theatre Festival in 1988, by The Actors Company and subsequently played the Derry Arts Festival and Arbour Hill Prison. THE CHRONICLES OF OGGLE was produced by Everyman/Asylum productions and played in Cork and on tour in Ireland in 2013 and 2015. It is published by Methuen.
Director: Marisa Conroy
Cast: Wesley O’Duinn & Tony Doyle 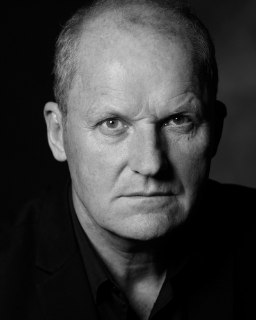