CIRCUMSTANCE (Dir. Maryam Keshavarz, 2011)
Rebellion, subculture, friendship.
A group of young women and men defy written and unwritten laws when they band together to create a safe space for themselves in Tehran. A memorable in-your-face scene mocks state censorship of films in Iran, but in fact the footage had to be filmed, under cover, in Lebanon.
–‘Sundance’ meets the Iranian New Wave.
www.filmqlub.com 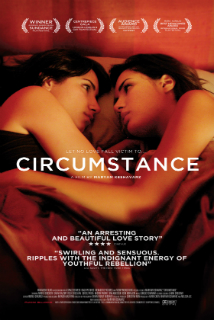