(short scene), directed by Anthony Fox, performed by Steve Blount & Danielle Galligan
Catherine is looking for help with some issues. Alan is a therapist; he makes money helping people resolve their issues.
He’s confident he can help Catherine, so confident that he doesn’t even need to listen to her to do it. Isn’t that impressive?

I AND THE VILLAGE by Darren Donohue

Keicha and Jeta have shared a room together for years, their memories and fantasies merging into one story of longing and survival. When eighteen-year-old Hannah arrives, she finds herself swept up in their reality and must fight to maintain her sense of identity.
‘I and the Village’ follows three African women living in the Direct Provision System. Direct Provision is the system asylum seekers must enter while awaiting a decision on their applications in Ireland. Regrettably, many asylum seekers live in the system for years and ‘I and the Village’ looks at the dire consequences of this long-term confinement.

VERSES FROM THE WASTE by Siobhán Egan

Savannah works at the pay booth of the local waste disposal centre under the watchful eye of her supervisor Mrs Featherstone. Savannah’s love of poetry sustains her as deals with tricky customers, but the complicated lives of her friend Jade,  her wayward siblings and her Novena obsessed Nana are intruding on her day. When Jade’s anniversary celebrations go astray, things begin to fall apart….

directed by Matthew Ralli, performed by Gabrielle Breathnach, Conor Delaney, Caitríona Ennis, Tom Moran & Clelia Murphy
A play about a family crumbling after the son, Liam – a promising athlete – breaks his leg in an accident. The mother, Deirdre is an alcoholic who tries desperately to hide her addiction and hold the family together despite being the one tearing it apart. It’s about family and the bonds that hold us and bind us and can separate us. It’s about how the past can eat at us and how we can try valiantly to avoid facing it.

ONCE MORE WITH FEELING by Clara White

A play about David & Eliza, a brother and sister who were separated as children and meet again, 20 years later, at their old family home.

Flicker is centred around the making of a documentary about a house fire that has become an urban myth. In these times of post truth and alternative facts, when science and evidence are undermined by forceful rhetoric and unconscious bias, truth can become a commodity. And the search for that truth can become good content.

Primarily an actor, Madi is a graduate of Gaiety School of Acting full time course 2015. Recent screen credits include the role of Stella Lyons on RTÉ’s Fair City and Goneril in WarTank Production’s King Lear for Shakespeare Unwrapped. Recent stage credits include: Tanya in The Granary Theatre’s production of Punk Rock in Cork this past February, Dubliners Women national tour, The Spinning Heart, by Donal (The Gaiety Theatre, The Mill Theatre Dundrum and Smock Alley, 2017). The Fool and Cordelia in King Lear, Lady Capulet in Romeo & Juliet (Gaiety School Shakespeare Programme) national tour. Remember To Breathe (Tiger Dublin Fringe 2015) written and directed by Orla Murphy as well as the award-winning playwright Philip Doherty’s premiere of The Full Moon Hotel in Smock Alley Theatre. Madi is a skilled musician as well as actor, trained with ABRSM in classical violin (grade 8). Previous writing credits include a 20 minute staging of her one-person show ‘Handing It’ as part of Scene & Heard 2017.

Siobhán is a part time nurse and writer. A native of Dublin she has lived in Kildare for the past 25 years.
Initially concentrating on prose, her stories have appeared in the WOW Anthology and Crannog. She was recipient of the WOW2 Award 2013. Her work has also gained honourable mentions in New Millennium Writings 2012 and the Seán Ó’Faoláin Short Story Competition2013. She also received the runner-up prize in the Carousel Writing Award 2013.
In 2014, she graduated from the ‘Creative Writing for Publication Course’ at Maynooth University with first class honours. During this time she found her voice in drama and completed the Fishamble Playwriting Course in 2015. I n 2016 she attended ‘Hedge School on the Moone’, a year-long course for graduates of the creative writing course in Maynooth, during which time she wrote a full length play.
She is currently studying for a degree in
literature and sociology through DCU Open Education.

Ultan Pringle is a twenty year old writer from Killybegs, Co. Donegal. Two of his plays – Us and Hearts of Stone – have been produced in Dublin University Players and his play, School House Rules comes to the Balor Arts Centre, Ballybofey, at the end of August after a sold out run in Killybegs.

Clara White is an Irish writer and actress. Clara wrote her first story at the age of 5 and has been writing ever since.
Her passion for acting brought her to Stage Coach, Performing Arts School, which she attended for a number of years. Later in life she would go on to study Animation, which combined her love for drawing and story-telling.
After she got her degree in Animation, she continued to study acting with the likes of Terry McMahon, Kirk Baltz, Elizabeth Moynihan and Peter Sheridan, to name a few.
Her first short film ‘Doors’ was accepted into a number of film festivals and she hosted a night in association with Pieta House for it.
Clara is now in the process of completing her first feature film and her first play. Her passion project, however, has been her play.

Roisin took part in the Royal Court’s Young Writers’ Programme in 2008 and has taken part in the Abbey Theatre’s New Playwrights Programme (2010-11). She has had three plays produced in Dublin. Her first play, CHAOS THEORY, was produced in The New Theatre in 2010, her second play, NOTEWORTHY, was produced in Theatre Upstairs in 2013 and SICK was produced as part of Dublin Fringe in 2014, in The New Theatre. NOTEWORTHY was shortlisted for the PJ O’Connor award in 2014 and she was awarded the Greenlight Fund from the Abbey Theatre to help produce SICK in 2014.
New Play Dramaturg: Pamela McQueen
New Writing Coordinator: Jane McCarthy 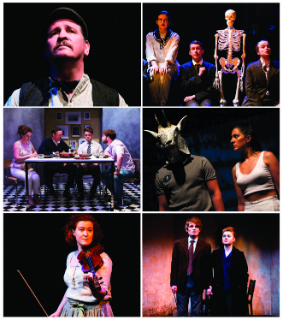