AboutFACE presents their 7th annual play readings festival at the New Theatre’s upstairs lab space, showcasing a selection of outstanding new writers, Irish and American. Readings are followed by Q&As with the playwright, including writers travelling from the US, where the audience’s feedback helps develop the play.

Thursday 8th November at 6.30pm in a double-bill

Deanna and Paul by Dagney Kerr

When a boy with a tight lid on his heart and a girl with a sensitive spirit (and a strict no-tipping policy) meet one rainy night, their lonely worlds collide in a small-town diner where magical things happen and one cup of coffee can change everything, in this sparkling romcom.
&

Modern romance in Dublin ain’t so easy, no matter what age you are – or what music you listen to. Even when you’re trying your hardest, heartbreak is so easy, but life is short and there are sexy selfies. Relationships criss-cross and clash in this kaleidoscope drama of flirting, falling apart and finding love.

The Caspian Sea by Neil Sharpson

In the totalitarian, Neo-Luddite state of the Caspian Republic, artificial intelligence is outlawed. But the Republic is thrown into disarray when a murdered man is revealed to be an AI living there in secret. Somehow dead-end State Security agent Nikolai South is tasked with escorting the murdered AI’s beautiful widow when she comes to Caspian … and is forced to make a choice between his duty and his sense of right and wrong, in this powerful thriller.

The Gods of the Ozarks by Matthew Kelly

Small-town doctor Jonah Hahn never intended to create a new religion in his tiny 19th century mountain community. But when people are dying all around of treatable illnesses and his wife is getting sicker, he must secretly overcome the ban on cutting corpses that holds back his medical understanding … only those bodies start resurrecting and a town goes wild, in this hilarious tale of ghosts and faith, promises and lies, and the war between science and religion (even after death …)

Holy and Unruly by David Beardsley

In 1593 amidst the war with the Spanish Armada, two of the world’s most powerful women, Queen Elizabeth and the Irish pirate Grace O’Malley, are forced into a meeting to try to save the realm … and themselves. But can they make a deal when they’ve got plotting English lords and bloodthirsty Irish rebels around them, can you believe a Queen who is seeing visions, and can two women trust each other in the heat of battle – and at what cost?

Supported by Dublin City Arts Office, by FRINGE LAB at Dublin Fringe Festival and by the New Theatre, and in partnership with the Off-Broadway theatre The Cell.
More information at aboutfaceireland.com 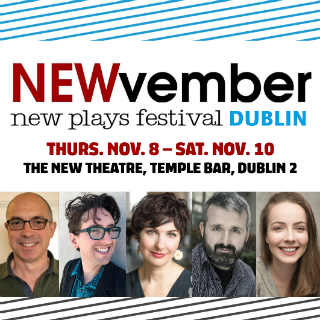