John Waters not only has created his own cinematic world, a distorted version of his native Baltimore, but he has also created his own visual language, a deliberate assault on the conventions of arthouse film. Non-professional actors recite or scream their lines, filmed in technicolour gaudiness, in plots that seem sketched on a greasy napkin at a road-side diner. Famously crass, coarse, and kitsch, there is a political refusal of ‘proper’ in all his work. Polyester makes those politics more obvious, but not more comfortable, in this tale about an oppressed housewife (played by Waters’ collaborator ‘Divine’, aka Harris Glenn Milstead), who learns the hard way that being a wife and mother is less important than being herself. 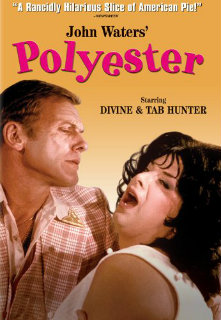