The battle between good and evil, heroes and villains, is as old as time, as modern as ‘Star Wars’. Hector fought Achilles at the battle of Troy, just as Darth Vader takes on Luke Skywalker.
Jack Harte’s satirical comedy ‘Killing Grandad’ brings to life such a duel in Irish Mythology between the legendary Balor of the Evil Eye and the young upstart, Lugh. The scene is set for the mother of all struggles when Lugh leads his army forward for the Battle of Moytura, assured that his destiny is to kill Balor.

As the mythical confrontation unfolds, we realise that these characters, with their preoccupations and ambitions, are not just ghosts from some ancient time but are very real and powerfully resonant in our modern world – of course the modern perspective is ironic and humorous.

Back in the Time of the Greeks
In 2016 Jack was invited by the Theatre of Komotini in Greece to write a short play based on Irish Mythology for a show they were planning, ‘We call them the Galatians’, exploring the relationship between the Greeks and the Celts. He chose to dramatize the story of Lugh and Balor. The opening night of the show was presented in the Ancient Theatre of Maroneia, one of the old amphitheatres that was built to stage the works of playwrights like Sophocles in the Golden Age of Greece. Subsequently Jack felt that these two characters and their famous confrontation in Irish Mythology had much comic and satiric possibilities, so he wrote a new play to explore them, Killing Grandad.

The North versus the South
In case anyone might think that tensions between the North of Ireland and the rest of the island started in 1922, be assured that the rivalry was around long before that. When the Tuatha De Danann invaded the Emerald Isle, they subjugated most of the country with one decisive battle. But to gain complete control, they had to deal with the Northerners, Fomorian pirates, masters of the black arts, lurking in the islands and mountains of Ulster, and protected by their great champion, Balor, from his fortress on Tory Island. What they needed to tackle this formidable enemy was a champion of their own. Eventually they found one who was brave enough, or naive enough, to challenge Balor.

Jack Harte – Playwright
Jack Harte made his debut as a playwright in 2015 with Language of the Mute (New Theatre, Dublin) which toured nationally in May, 2016, taking in theatres like the Hawk’s Well in Sligo and the Taibhdhearc in Galway. This was followed by The Mysterious History of Things (Viking Theatre, July/August 2016), and Lugh and Balor which was performed in Greek translation at the Ancient Amphitheatre of Maroneia and the Theatre of Komotini, Greece (Aug/Sept 2016).
Jack Harte has published four story collections – Murphy in the Underworld (1986), Birds and Other Tails (1996), and From Under Gogol’s Nose (2004) and Rehabilitating the Serpent (2017). His novel, Reflections in a Tar-Barrel (2006), was nominated in Des Kenny’s book as one of the 101 Irish Books You Must Read. His second novel, Reflections in a Tar-Barrel (2007), was first published in Bulgaria where it was a major success. Overall his fiction has appeared in 12 languages.
More info:   www.jackharte.com

Gerard Lee – Director
Gerard Lee is an actor, writer and director who has worked extensively in theatre, radio, television and film for over thirty years. As an actor he has appeared in Father Ted (Channel 4), Killinaskully (RTE), Vicious Circle (BBC), Mattie (RTE), Striking Out 2 (RTE), Mother’s Day (BBC) and Quantico (ABC), as well as in theatres all over Ireland, including in the Abbey Theatre in Tom Murphy’s acclaimed The House and in Field Day’s Uncle Vanya with Stephen Rea at the Gate. Gerard’s directing credits include Declan Gorman’s Dubliners Dilemma, based on the correspondence between publisher Grant Richards and James Joyce on the publication of Dubliners, which toured widely including the US, Mumbai, the Tolstoy Museum in Moscow and the Ibsen House Museum in Oslo, and Declan Gorman’s recent play Falling Through the Universe, which looks at a young artist’s discovery of Joyce’s story The Dead while living away from his native Ireland. Gerard will revisit both of these shows for Bloomsday 2020 at Smock Alley. Other directing credits include Gotta Get A Gimmick and Out On Thursdays, two cabarets at Bewley’s Café Theatre. Most recently Gerard directed his own Joyce play SirenSong for the Trieste Joyce School 2019.
Gerard has an M Phil in Creative Writing from the Oscar Wilde Centre in Trinity College Dublin, and his debut novel Forsaken was published by New Island Books in 2014. Several of his plays have been produced in Dublin, including Mangan’s Last Gasp, which deals with a surreal death-bed meeting between Dublin poet James Clarence Mangan and Dr William Wilde, (in which the author also played Mangan), and A New Day, both for Bewley’s Café Theatre, This Old Man at the Viking, Unlucky for Some at Theatre Upstairs, and One Is Not Oneself at the New Theatre.

Michael Judd – Actor
Michael began his career with Tomás Mac Anna of the Abbey Theatre. He later moved to the US appearing in Grandchild of Kings written and directed by the multi-Tony Award winning Broadway producer and director Harold Prince.  He later joined the acclaimed Irish Repertory Theatre Company in New York City appearing in many productions including, Juno & the Paycock, Shadow of a Gunman and Madame Macadam’s Travelling Theatre. Other appearances in New York City include A Couple of Blaguards by Frank McCourt, at the Triad Theatre, the title role of Hugh Leonard’s Da with the late Chris O’Neill at the Bronx Irish Theatre.  Regional US theatre appearances include The Playboy of the Western World with America’s premier theatre company, Steppenwolf, Colm McPherson’s The Seafarer at Capital Repertory Theatre, Albany, New York and a regional tour of A Couple of Blaguards.  Here at home, Michael has appeared in Brian Friel’s The Home Place, with Tom Courtenay at the Gate Theatre and on London’s West End. He toured to Japan with Mouth on Fire Theatre Company in Samuel Beckett’s Waiting for Godot, and played the title role in their production “A Celebration of Jonathan Swift: A Modest Proposal” at Dublin Castle. Most recently he appeared in their production of Samuel Beckett’s All That Fall, presented on Culture Night 2019 at Áras An Uachtaráin.  For Axis Arts Centre, Ballymun, he appeared in Dermot Bolger’s The Consequences of Lightning and The Townlands of Brazil, as part of his Ballymun Trilogy, which also toured to The Polish Theatre, Wroclaw, Poland and Our National Games by Gerard Humphries, directed by Ray Yeates. Other appearances include Eugene O’Neill’s Hughie, at Bewley’s Café Theatre, The Green Fool, based on the life of Patrick Kavanagh and Seán O’Casey’s Cock-a-Doodle-Dandy. Michael performs an adaptation of Michael MacLiammóir’s celebrated one-man show The Importance of Being Oscar with which he continues to tour the island of Ireland.  TV/Film: The Maamtrasna Murders for TG4 The Flight of the Earls, and Frongoch for TG4 and ITV Wales; Northanger Abbey for ITV; The Clinic and Killinaskully, for RTE, and The Man Who Invented Christmas with Christopher Plummer, Jonathan Pryce and Dan Stevens. Radio: Ulysses, for WBAI Radio NYC, Cobwebs and Chandeliers and Talking to Mr. Wall for RTE Radio 1. Michael will feature in an episode of the upcoming Sixth Season of History’s Vikings.

Kevin McMahon – Actor
Kevin McMahon is a recent graduate from TUD’s BA in Drama & Performance. Kevin’s college productions include Michael McCabe’s Cirque D’Imaginaire and Bairbre Ni Caoimh’s Girls Like That and The Panel , Kevin also studied in the Lir Academy as part of their foundation course, graduating in 2016. In recent years, Kevin has worked in a number of student short films. He has worked with IADT, TUD and Pulse college. As well as this Kevin recently featured in the Irish debut of The Haunted Host playing Frank in Melia theatre company’s opening production. Following this Kevin got the role of the Celtic God ‘Lugh’ in Jack Harte’s Killing Grandad.

Kevin McMahon as LUGH and Michael Judd as BALOR. 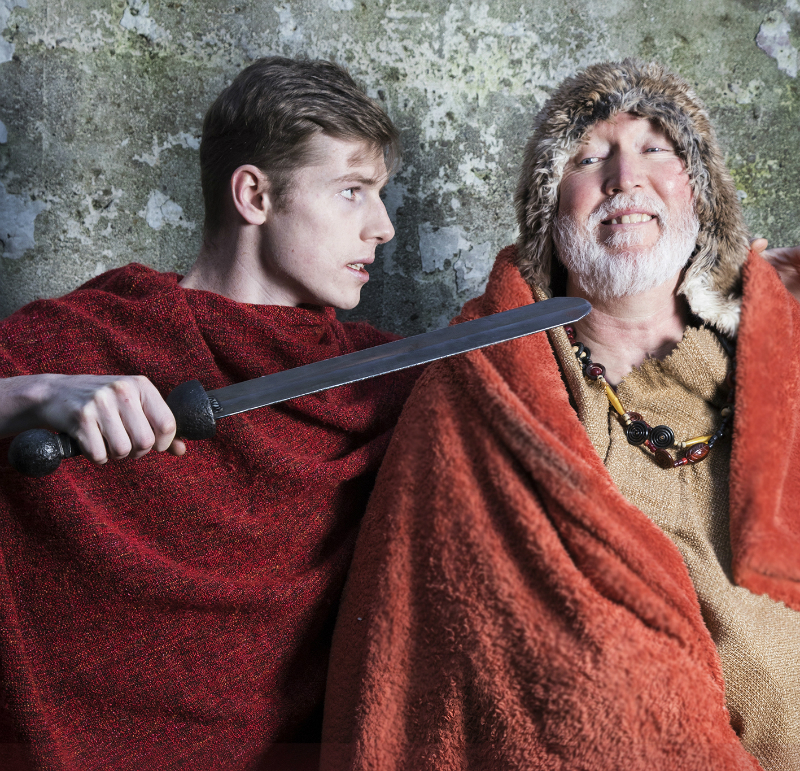