Annie was five years old when her heart was broken for the
first time. Her pain can be mapped in the streets of her
childhood, especially Spencer Dock Bridge, nearby Guild
Street and the berth for the B & I boat, that for decades took
thousands of emigrants from Ireland to work in Britain during
the 1940s & 1950s.
Ann Matthews’ new memoir play charts the story of Annie’s
relationship with her parents; her father looking for work
overseas, her mother minding and schooling Annie and her
siblings in Dublin’s 1950s Seville place.

ABOUT THE AUTHOR
Ann Matthews, PhD wrote her first play, LOCKOUT, in 2013 and it was produced by The New Theatre. She is also a published historian. Her works RENEGADES: IRISH REPUBLICAN WOMEN, 1900 – 1922  and DISSIDENTS : IRISH REPUBLICAN WOMEN, 1922-1941  were published in 2010 and 2012 respectively.
In 2010, as part of the NUI Maynooth Local History series, THE KIMMAGE GARRISON 1916: Making Billycans at Larkfield was published.
Her other works include VANGUARD OF THE REVOLUTION in Ruan O’Donnell (ed); THE IMPACT OF THE 1916 RISING (Dublin, 2008); CUMANN na mBAN AND THE RED CROSS, 1914-1916 in Associational Culture in Ireland and Abroad, edited by Jennifer Kelly and R.V. Comerford (2010); PARADE OF POVERTY IN THE STREETS 1913 : the mothers and children in A CAPITAL IN CONFLICT; DUBLIN CITY and the 1913 Lockout (eds’ Francis Devine, Mary Clarke and Maire Kennedy, published by Dublin City Council, 2013).
In 2014 she published the IRISH CITIZEN ARMY. Ann is currently working on her new play TWO DUBLIN WOMEN set in 1944.

ABOUT THE ACTOR
Amy O’Dwyer has a BA in Drama and Theatre from Trinity College Dublin, and graduated with a distinction from the London School of Musical Theatre.
When not acting, she works as a producer with The Podcast Studios, and has worked in radio as a newsreader and presenter.
TV/Stage credits include: A LITTLE HEART (Smock Alley), 24HR PLAYS (Abbey Theatre), SOMETHING ABOUT PRAYERS (Filmbase Short), FAIR CITY (RTE), LEDWIDGE (The New Theatre & National Tour), LOCKDOWN (The New Theatre & National Tour), MAKING DADS ARMY (BBC), MADAME MARKIEVICZ ON TRIAL (The New Theatre & National tour), PETER PAN (Gaiety Theatre), BOYS (Cork Arts Theatre), THE LAST FIVE YEARS (Project Arts Centre), IF I WERE YOU (Cork Arts Theatre), IMMACULATE (White Bear Theatre, London), KATIEMAG (The Everyman Palace/Smock Alley), WHO WILL CARRY THE WORD (Brockley Jack Theatre, London), OUR TOWN (Camden People’s Theatre, London), PLAYGROUND NIGHT (Theatre 503, London) 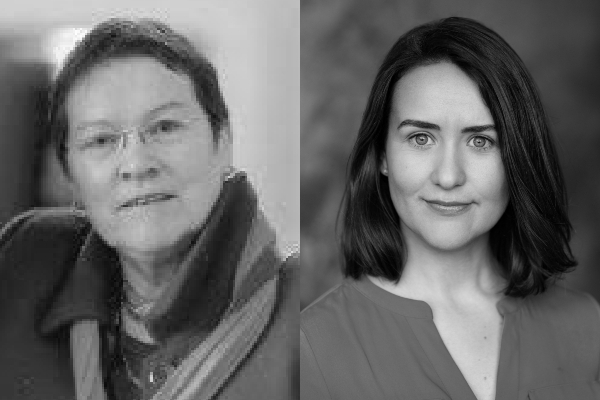