History of The New Theatre

This video was produced by Patrick Clarke and tells the story of how The New Theatre came about, including interviews with the key people involved. 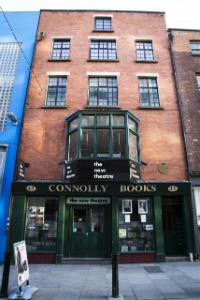 The building is one of five properties in East Essex Street that belonged to John Rogerson (Sir). It was built in 1691 as a standalone (detached) building in the Dutch Billy style. It is one of the oldest buildings in Temple Bar and served many purposes over the years before becoming today’s book shop and theatre. The present state-of-the-art new theatre venue was constructed in collaboration with Wallace Construction and Connolly Books and launched in 2007 in conjunction with the Theatre’s tenth anniversary. It has housed many successful productions since its conception and will continue to do so.

Situated in the centre of Dublinʼs historical and cultural quarter of Temple Bar, The New Theatre is an intimate hub of art and culture. Since 1997 weʼve carved out a home for developing writers, actors, directors and technicians, a place to hone their craft. Weʼve seen countless debuts, festivals, revivals and world premieres. Our shows are divergent, socially engaged, well attended and critically acclaimed. 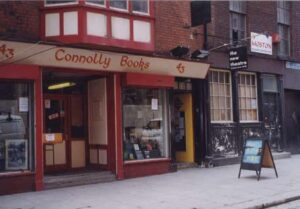 The New Theatre began in 1997, when Artistic Director Anthony Fox and his wife Leanne Willars returned from New York City with a view to establishing an artistic space that would tell those Irish stories that were overlooked – ʻgiving a voice to the unheardʼ. Along with designer and director Robert Lane and a dedicated team of actors, designers and technicians, they created a space in a hall behind Connolly Books. The first production was Christina Reidʼs Joyriders, followed by Alan Robertʼs The Rasherhouse – a major production and a massive sell out success – announcing that The New Theatre (then known as Sionnach Theatre) had ʻcrashed the Dublin theatre scene with dramatic effectʼ – Emer Oʼ Kelly, Sunday Independent. 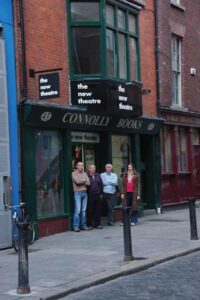 Since then, weʼve seen many changes – the theatre and bookshop were completely renovated in 2006, during which time we became a touring company – and we were re-launched in 2007 with Sean OʼCaseyʼs The Shadow of a Gunman, directed by our one time Joint-Artistic Director Ronan Wilmot. Weʼve moved from long running in-house revivals to shorter runs of new plays, in order to allow more artists more opportunities. In 2012, we became the first venue committed to New Writing from conception to final draft to casting to production, a policy that created a ripple effect throughout the Dublin Theatre scene. Weʼve seen many hugely successful shows and artists on our stage: our adaptation of Joyceʼs A Portrait of the Artist as a Young Man, Michael Collinsʼ Ireland Shed a Tear?, Lauren Shannon-Jonesʼ Olympia, Jane McCarthyʼs Overtime, Gerard Humphreysʼ Ledwidge and Ann Matthewsʼ Madame de Markievicz on Trial to name a few.

In over two decades on the Dublin Theatre scene, many changes have taken place both within Dublin and on our stage. Art must inevitably reflect the society in which it exists and no art form can reflect this as immediately as theatre. Nestled as we are in the centre of the capital city, we aim to be this reflection, holding a mirror to society now as we aimed to do back in 1997, with theatre that is vibrant, current and dynamic, a voice for people in Ireland and a home for new work.