The story is told through Billy and Breda, married with kids who find the gulf in their relationship widening. Breda loves Billy and is determined to renew Billy’s interest in her. Billy has more interest in getting off with the local beauty Imelda Egan so that he can become “James Galway, the man with the golden flute”.

This boozy weekend staggers through the couple’s lives with hilarious and heartbreaking consequences.

Shiven Productions was founded at the beginning of the year 2011 by actress Louise Holian. This is their debut production. The company is currently based in Dublin, but most of the theatre practitioners and musicians involved hail from the Roscommon area. (The name of the company comes from the river Shiven which runs just outside of Louise’s hometown, Ballygar.)
Louise worked with the Galway Youth Theatre for many years and then went on to study theatre at Inchicore College and after graduated with a BA in Theatre and Choreography at Dartington College of Art. 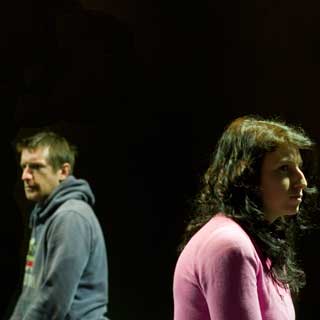