5 Writers In Search Of A Producer

OUT OF SIGHT by John Stack

‘Out of Sight’ is a surreal play that investigates the secrets and the relationships of a dysfunctional family.
Compelling, powerful and evocative, it continues to reveal right to the bitter end.
About the Author
John is from Waterford and ‘ Out of Sight’ is his third one
act play. His first play ‘Just a Game…?’ and his second play
‘Pictures’ were award-winning festival plays. He has scripted a number of
radio documentaries:’The Road less Taken (life of Liam Clancy)’, ‘Flour Power’
and ‘Field of Dreams’.
RUNNING TIME APROX 45 MIN

‘Elvis’s Toenail’ is Fionnuala’s first full length play. Her mother and father ran a shop and clothing factory near the Sundrive Road in Dublin in the sixties. Everyone lived in two realities, what you could speak about and what you dare not mention. This play navigates that contradiction.
About the Author
Fionnuala was born in Dublin and worked there as an actor in the late sixties early seventies. Her best memories are working with Phil Lynott and Thin Lizzie in The Peacock and with The Dubliner’s on ‘Richard’s Cork Leg’ in the Royal Court Theatre. She currently lives in the U.S. and this play is dedicated to her mother and father and all those who worked at 161.
RUNNING TIME APROX 90 MIN

THE ELEPHANTINE by Micheál Lovett

‘The Elephantine’ is set in 1922 at the height of the civil war in Ireland. Lord Fitzwilliam, his wife and staff are prisoners in their ascendancy home surrounded by the revolting natives. The collapse of the ‘big’ house, the Fitzwilliam family and the Irish State under British rule merge to a pulsating finale.
About the Author
Theatre includes: ‘The Deadman’s Beard’ (Everyman Palace/National Tour.), ‘This Ebony Bird’ (Half Moon Theatre/SFX), ‘Tricky’ (Richmond Studio/Kings Cross Theatre, London), Macbeth at The Gates (English Theatre Co, New Orleans), ‘Jumping The Sharks (Smock Alley). T.V.: All Saints (Ch7 Aus), Print and be damned, Ned Kelly-the lost years, Washed Up, Balls of Steel, Legally Brown.(Endamol, Aus.)
RUNNING TIME APROX 95 MIN

‘Slates’ was commissioned by Blood in The Alley in 2009 and since then has gone through a major development period between the writer, the actors, Tom Hickey and Don Wycherely and the company.
‘Slates’ is a revenge play at one level where a Cork man returns from London and comes calling at the door of a retired teacher. At first it presents as the old man being ripped off on a construction job at his home but what follows is a teasing out of a desire for resolution, justice and revenge.
About the Author
Originally from Waterford, Liam works as a crime reporter with the Irish Examiner. Liam has been writing for theatre for fifteen years. His theatre work includes; ‘Girl from Gdansk’ (Keegan Theatre, Washington.U.S.A.), ‘Love Peace and Robbery’ (Granary Theare, U.S. Tour, Cat Club Cork, 2013 West Cork Fit-up), ‘Ding Dong’ (Half Moon Theatre).
RUNNING TIME APROX 85 MIN

SOME SPECIMEN by Shane Mac an Bhaird

What if you found something you couldn’t understand? Something that upset all your certainties and left you alone and afraid?
In a run-down experimental ecology lab in Antarctica, two scientists, Boylan, a jaded Professor, and Cook, his intern, are studying a hole that has been drilled 3 km deep into the ice. During a storm, which isolates the scientists from the outside world, they make an unexpected discovery that will alter their relation to the world, to themselves and to each other. This play is an exciting and comic exploration of desire and loss, set in the harshest most uncompromising landscape on earth.
About the Author
Originally from Ballybay, Co. Monaghan, Shane lives in Dublin. He recently completed an MRes in Playwriting at the University of Birmingham and has had work performed at Petit Theatre du Bonheur, Paris and Old Joint Stock Theatre, Birmingham. His work has been published in Wordlegs: 30 under 30, The Irish Times, The Bastille, The Bohemyth, The South Circular, Ropes and in 2013 was a prizewinner in Doire Press Int. Poetry competition.
RUNING TIME APROX 105 MIN 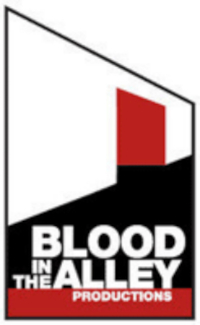 Blood In The Alley