Home  /  Event   /   A Kitchen Nightmare – Fundraising Event
Back to events

Irish premier and bare-knuckle boxer Mick Connor has vowed to shake up the political establishment with his fists, but his private life is a mess. While all of his brothers and most of his friends are sorted, Mick just can’t seem to find that special person to settle into a long term feud with. He embarks on a quest to find personal fulfilment and meets a host of extraordinary characters along the way, from Gordon Ramsay to Mickey Rourke.

Celebrity impressions and brilliant original characters come together in this hour long sketch show that played to full houses at Dave’s Leicester Comedy Festival in February.

About the makers
Liam Hourican has written and starred in two sketch shows for Channel 4, APE and iCandy, and appeared in Channel 4’s impressions show Very Important People and the IT Crowd. He also starred in RTE’s hugely popular The Savage Eye. He performs regularly on the London stand up circuit. show reel.

Tom Collinson is a writer/director and has made programmes for the BBC, ITV and Channel 4. He created, wrote and directed two series of the sit-com Self Storage for Radio 4 starring Reece Shearsmith and Mark Heap, which The Times called, “A Beckettian examination of the parameters of solitude with plentyofwrylaughs”. 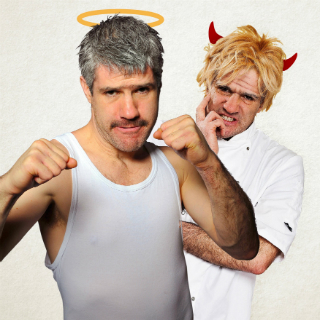